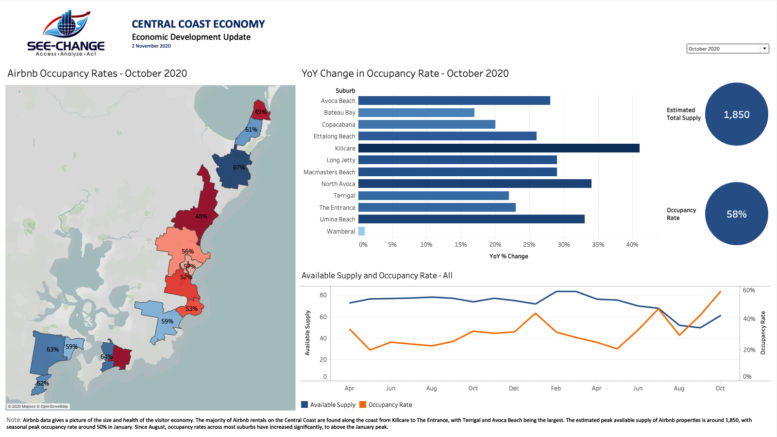 Finding a home to rent on the Central Coast is becoming increasingly difficult, with more people moving to the region and an increase in Airbnb short-term rentals leading to a huge drop in the number of available long-term leases.

Data compiled by See-Change Analytics show Airbnb occupancy rates averaging 60 per cent, surpassing January data, which is a year over year increase of over 20 per cent in most suburbs across the Central Coast, excluding Wamberal.

Founder of See-Change, Patrick Spedding, said it is important to point out this is the average occupancy rate for the whole month.

“Typically, over 75 per cent of short-term rental accommodation sits empty during the week.”

Data also shows that in October, 28.5 per cent of dwellings in Pearl Beach were listed as Airbnb’s.

Other suburbs which recorded having a high rate of the housing market as Airbnb’s include Killcare at 25.1 per cent, Macmasters Beach at 15.3 per cent, and Copacabana at 12.1 per cent.

Meanwhile, the region-wide residential vacancy rate has fallen to below 1 per cent.

“The increase in Central Coast property demand has seen the total number of residential rental vacancies drop from 1,000 in January to around 200 in September, a drop of more than 80 per cent,” Spedding said.

Many are feeling impacts of the rental crisis.

Central Coast Newspapers spoke with one family of four who have been looking to move to the Coast for over a month but have had no luck.

“We are both employed professionals in our mid-40s, and we have two sons aged 7 and 11,” the mother said.

“So far, our application process has not been easy, and there is not much stock, we know.

“I grew up on the Central Coast, and I am looking forward to bringing up my family here.”

A Bensville family has also found it impossible to rent any accommodation over the past three months.

They were initially looking for houses to buy, but with prices spiking and rentals hard to find, they have resorted to moving into a friend’s house.

Not every suburb has seen this dramatic shortage of available housing with suburbs further north receiving the highest number of residential building approvals.

However, Spedding said this is not where the demand is.

“The lowest demand for property is seen in the north at Warnervale, Hamlyn Terrace, Wyee, as well as Gosford,” he said.

“Ironically, these locations coincide with the suburbs receiving the highest number of residential building approvals over the past 12 months.

“Conversely, where demand is highest, the lowest rates of residential building approvals are seen.

“It’s important to note that several international studies, as well as Australian studies, including specific studies of Byron Bay and Hobart, have demonstrated the socio-economic impacts of excessive short-term rental accommodation.

“When combined with the fact that Central Coast already has the highest homelessness or at-risk count in NSW, and one of the lowest rates of building approvals in Australia, the impact of an unregulated short-term rental market is severe.”

Anzac Day services to be held in many locations