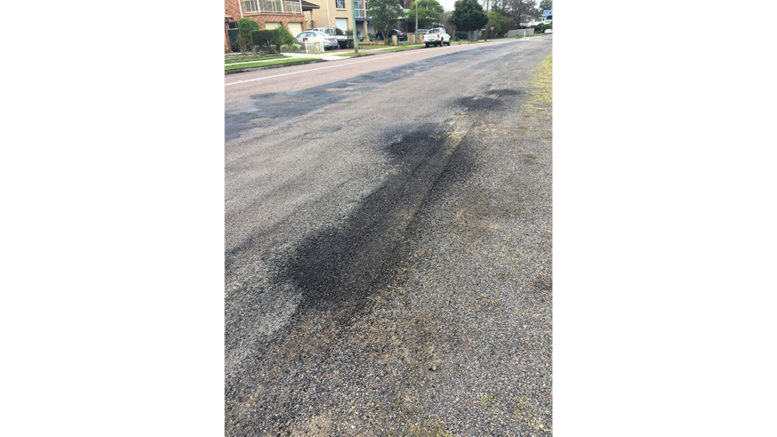 “They have been using a “jet patcher” machine unsafely for years, despite my warnings that the fine gravel it leaves behind is a serious hazard, especially to motorcycles and bicycles,” he said.

“I saw a recently patched area where the truck was used to roll the surface flat and level, however, only one pass was done, leaving much of the patching unrolled and not compressed.

“This method spreads the small stones over the road where they act like ball bearings because stones stick to the truck tyres with the wet sticky emulsion and subsequent traffic continues to spread the dangerous mess because Council staff haven’t manually swept the stones, as they are supposed to.

“This makes the area very dangerous to motorcycles and bicycles and the stones blend in with the road surface, making them invisible under various light conditions, even worse at night, and a motorcycle rider has little to no chance of reacting.

“This method of roughly attempting to repair potholes needs to be discarded and improved immediately.

“I’ve never seen anything more negligent when it comes to road maintenance.

“I do not profess to be an engineer in road construction or maintenance, but I have ridden motorcycles competitively offroad for most of my life, which has taught me to read the surface and ride according to the conditions.

“I have also driven large buses professionally on the Coast, so I feel justified in commenting on road surface safety.

A Council spokesperson said that they considered the quick attention to potholes a priority to ensure the safety of road users.

“This is done through a variety of techniques depending on the road surface, including resealing, rejuvenation and pavement rehabilitation.

“On bitumen roads, the application of bitumen emulsion done by Council using the Jet Patcher truck, is estimated to fill potholes at least three times faster than placing asphalt manually, which means significantly less disruption for traffic and our community.

“The potential for loose stone on roads is always present as a result of a heavy volume of traffic movements.

“Council staff have an ongoing maintenance program to remove any excess quantities of loose stone that may accumulate by mechanical or hand sweeping.”

The Council spokesperson said there had been improvements made recently to the truck set-up, material selection and improved operator training to further ensure a quality outcome when filling potholes.

Pennings also questioned Council’s decisions about which roads to repair as priority.

He said an example was Lakedge Ave, Chittaway Bay, between Chittaway Rd and Platypus Rd, which had been in a “disgusting” state for many years.

“Other roads such as Aston Wilde Ave and Kingsford Smith Dr, which were in much better condition, in fact good condition by comparison, have been resurfaced with good quality asphalt, while Lakedge Ave continues to receive poor patchwork,” he said.

“It is probably one of the worst roads in the area and it carries a lot of traffic compared to the other roads I mentioned,” Pennings said.

“There’s more than 2,200kms of roads on the Central Coast and projects deemed to have the highest priority are looked at first on behalf of the community.

“Sometimes Council isn’t alerted to the location of potholes and we encourage residents to report any road concerns directly to Council via the Report and Issue icon on our website,” the spokesperson said.