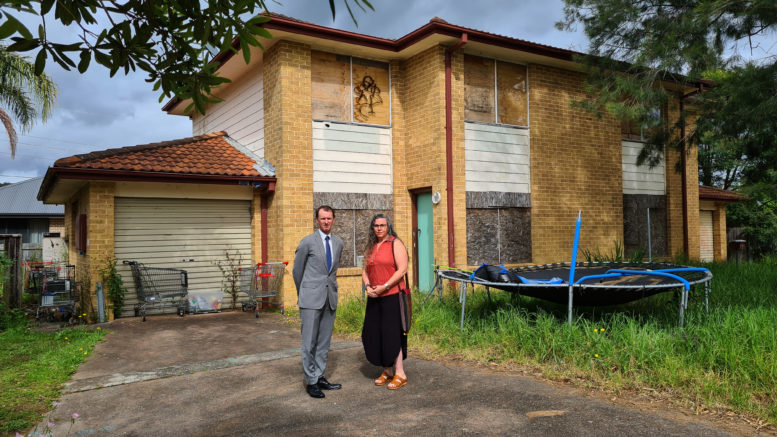 The Entrance MP David Mehan, with Debbie outside neglected townhouses at Bateau Bay

A boarded-up and neglected townhouse duplex at Bateau Bay is one of 58 vacant public housing properties across the Central Coast.

The two townhouses at 5 and 6 Faye Cl have been vacant since September 2012 due to termite damage, but the property grounds have not been maintained, windows are smashed and the interior has been trashed.

The Entrance MP, David Mehan, said that since 2011, the State Government has sold several properties in the Bateau Bay estate and neglected the maintenance of many more, including those in Faye Cl.

He said there were now 130 fewer government owned homes on the Central Coast than in 2011.

“This does not help those who urgently need a roof over their head for themselves and their family, or people on lower incomes.

“The proper solution is adequate supply of public housing and we really haven’t seen the investment that we need.

“I know there’s people in this electorate who sometimes say there’s too much social housing, but the reality is there’s less now than there was 10 years ago.

“We’ve got less than we need, and by not having enough, you have the negative consequence of people being put into hotels instead of being put into a permanent home.

“The government has sold a lot of properties here but they really haven’t invested back into the public housing for the Bateau Bay estate, they’ve really just given it over to the private sector and the rents are just not affordable,” he said.

“Debbie is just one local that I hear from that needs urgent help to be housed as soon as possible,” he said

“She has six children, three with special needs, and is temporarily living in a two-bedroom granny flat, but she has to move out at the end of November.

“Her circumstances meet the definition of homeless as determined by the Australian Bureau of Statistics,” Mehan said.

Debbie said she and her six children, aged from 9 to 18, know they had to leave where they are at the end of the month but they have nowhere to go.

“It’s really really hard and unsettling for them and I’ve got a couple of children with autism so that makes it harder because they don’t have the space they need to decompress or for the therapy equipment they need.

“I’ve got a lot of sick children and my daughter has been in an out of hospital, my eldest needs surgery next month and my other daughter spent a month in hospital in Sydney this year, and not knowing anything about where we might be living just makes it all that much harder to manage and I’m managing it on my own.

“We just don’t have any security,” Debbie said.

Mehan said that he was concerned that properties such as Faye Cl remained dormant, neglected and useless while people such as Debbie and her family desperately needed this housing.

“There’s a lot of families who have just gotten used to living in a hotel and then there’s other low income families or pensioners who’ve rented cheaply in the private sector for a while, but when the owners reclaim the property for whatever reason, they then find themselves on the public housing list,” he said.

Mehan estimates that there are about 2,600 on the waiting list for public housing and about 200 of those are prioritised.

“The bottom line is that there’s just not enough public housing,” he said.

A spokesperson for the NSW Land and Housing Corporation (LAHC) said the Bateau Bay property had been vacant since 2012 because of extensive damage and following repairs and subdivision, the townhouses would undergo the final approval process to sell.

A statement from LAHC said that it was committed to working with their maintenance contractors to ensure that all social housing properties were kept clean, safe and habitable for all tenants.

Of those vacant properties, 38 are undergoing restoration and another 20 have had maintenance work completed and are now in the process of being allocated to people in need on the NSW Housing Register.

In 2019-20, LAHC says it spent $3.7M to restore 302 vacant social housing properties in the electorates of Wyong, The Entrance, Gosford and Terrigal, which equates to about $12,250 per vacant property.

As at May 2020, the total number of social housing properties in The Entrance electorate was 1,394 and 22 were vacant, in Wyong electorate there are 1,075 with 17 vacant, and in Swansea electorate, nine are vacant of the 781 total.

LAHC social housing that is no longer fit-for-purpose is sold and/or recycled to build new housing or undertake capital upgrades.