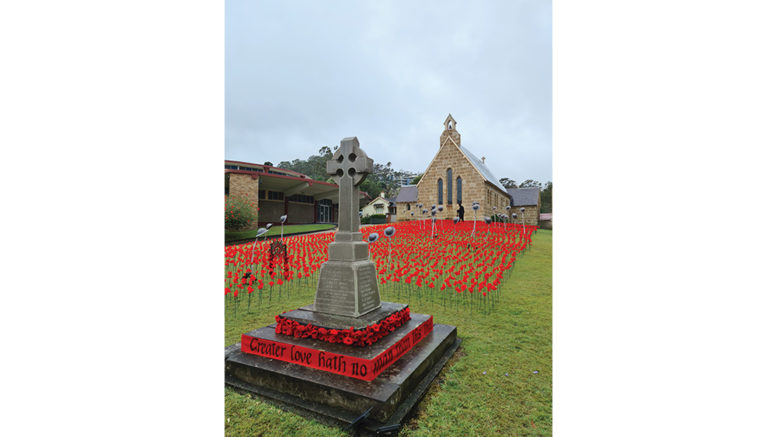 A new installation around the Celtic Cross War Memorial in the grounds of Gosford Anglican Church celebrates the centenary of the memorial’s installation as the Coast prepares to celebrate Remembrance Day on November 11.

A new installation around the Celtic Cross War Memorial in the grounds of Gosford Anglican Church celebrates the centenary of the memorial’s installation as the Coast prepares to celebrate Remembrance Day on November 11.

“This first Great War monument to be established in Gosford lists 30 soldiers known to the parish church,” Jackson said.

“Having arrived in Gosford at the onset of the Great War, Reverend Arthur Renwick knew first-hand the anguish and suffering experienced by families of this region, his difficult duty of informing the death of a loved one to a next-of-kin part of his pastoral care and service.”

Jackson, who is the creator of past successful poppy installations at Gosford and Terrigal, gained inspiration for this latest tribute from the emotive painting depicting ghostly steel-hatted fallen soldiers by Will Longstaff, Menin Gate at Midnight.

“With the majority of men listed on this memorial having no known graves, and several of these soldiers named upon the Menin Gate Memorial in Ypres, Belgium, the beautiful sandstone of Christ Church, Gosford, provides a striking backdrop to portray the importance of faith during the war,” she said.

“The 30 helmets in the poppy field are representative of the 30 soldiers listed upon the Celtic Cross War Memorial.

“The installation was made possible by the generosity of Gosford Rotary Club, Bunnings West Gosford, and a dedicated group of volunteers and supporters.”

Jackson said with COVID-19 making it impossible to include the number of people involved in other Poppy Projects, the poppy nets created by the community from 2014-2018 during the Anzac Centenary have been used in this latest installation, which will be on display over the next two weeks.

Gosford Anglican Church priest Father Rod Bower said he had been delighted to be part of the project.

“Reverend Arthur Renwick was quite an extraordinary man.

“His father was Surgeon General, and Renwick was sent off to Oxford to do a Masters degree in the late 1800s.

“He declined significant promotion during WW I because he wouldn’t leave what he termed as ‘my poor people’, the parishioners of Gosford.

“Gosford was a tiny village in those days, but still lost 30 men to the war.

“Every family was impacted – there wasn’t a family in the area left untouched by the war.

“We still have some of the letters written by mothers to Rev Renwick in response to his request to list their sons’ names on the memorial and the grief still oozes from the page after all these years.”

Remembrance Day will look a little different this year, with most RSL Sub-Branches deciding to abandon the regular cenotaph services to due to COVID-19 restrictions.

Central Coast District Council of RSL Sub-Branches President, Greg Mawson, said Sub-Branches in the region had been granted the go ahead to hold Remembrance Day services under the proviso that they enforce a 100-person limit at each event.

“This (crowd limits) is going to be very hard for the Sub-Branches to police,” Mawson said.

“We don’t want to turn anyone away, but we also can’t risk the community’s health or one of our branches being fined for breaking the rules.

Secretary of Gosford RSL Sub Branch, Patsy Edwards, said there will be no service at the cenotaph this year.

“We aren’t able to prohibit people coming in so keeping to the 100-person limit would be impossible,” she said.

Attempts being made to bring back Old Sydney Town

Desal plant off the table as dam levels rise