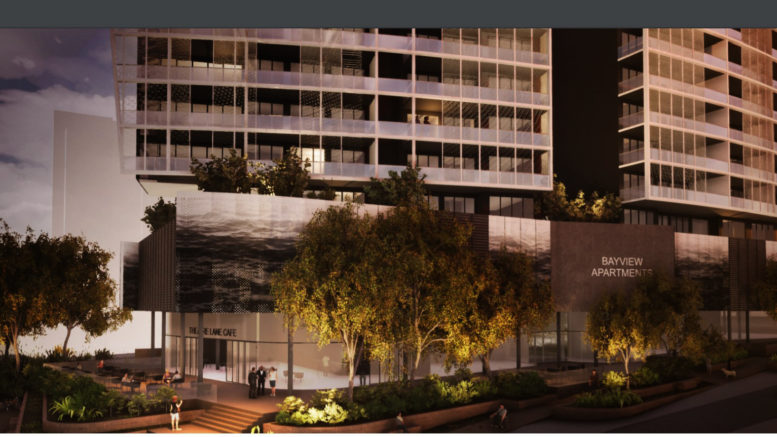 A twin tower mixed use development on the Short St car park site at The Entrance has been refused by the Hunter Central Coast Regional Planning Panel.

The proposal was for a mixed use development incorporating 102 residential units in two high rise towers, 321 parking spaces over three basement levels, retail/commercial spaces, as well as entertainment, community services and facilities.

Central Coast Council had lodged a development application to have a concept masterplan approved, but the Panel said it failed in design excellence and did not show any significant public benefit to justify the “bonus” height limit to just shy of 50m, almost twice as high as the nearest tallest building at 26m.

The Panel said a more strategic approach to the site was warranted with a detailed urban design study.

The study should provide a framework for “built form outcomes and scale relationship” with surrounding development and public domain, as part of the evolving town centre, identification of the public benefits and specific controls for the site.

Their concerns were the height, size and bulk of the buildings which were larger than a previously refused application, as well as the impact of overshadowing, loss of views, loss of privacy, increase in traffic and noise and general loss of residential amenity.

AARG also questioned the non-compliance with current development controls and whether there was a demand for more retail space when many shops in The Entrance were already vacant.

Spokesman for AARG, Denis Nuttall, said residents were extremely pleased with the Planning Panel decision to refuse the development application.

“We’re happy the Panel considered the objections raised and also that some residents were able to address the Panel via teleconference,” he said.

“The presentations were considered and the points raised were commented on by Panel members.

“We believe that we received a fair hearing and the decision by the Panel fully justifies the efforts of the residents to protect their building from being overshadowed by a gigantic structure,” Nuttall said.

This site has a long history going back to 2013 when it was identified as one of 32 sites at The Entrance, Wyong, Long Jetty, Toukley, Kanwal, Lake Haven and Warnervale to be developed under the former Wyong Council’s Key Sites Development Control Plan (DCP).

It was a scheme meant to promote economic growth and create jobs by offering incentives to developers, such as increased height limits and staged developer contribution payments.

Hopes of employment generating iconic buildings were dashed when few developers came forward with proposals and those that did failed to see them through to fruition.

The former Wyong Council put in its own concept masterplan for the Short St carpark in 2016, for 81 units in two separate residential towers, 93 car parking spaces and retail spaces, under the Key Sites Development Control Plan (DCP).

That plan for the Council owned site was subsequently rejected in May 2018, with one of the refusal reasons being “gross exceedance of the maximum building height”.

The Key Sites DCP allowed a 50m height limit while the current Wyong Local Environment Plan applicable to the site has a maximum height limit of 31m.

Council’s current DA had been twice amended following criticism by the RPP about its lack of detail and understanding of a masterplan worthy of this key development site.