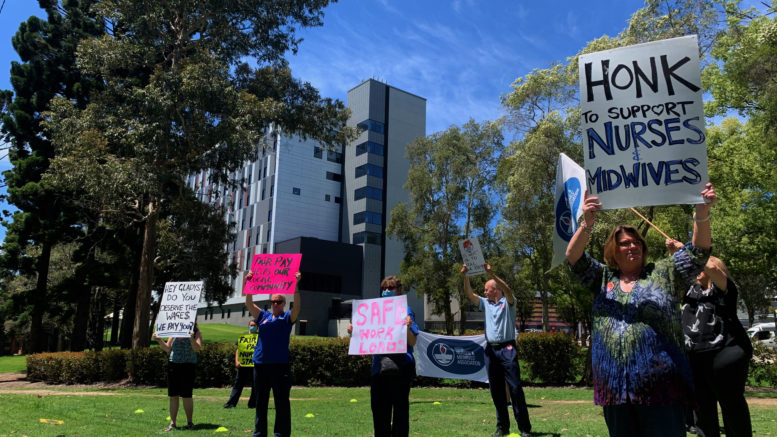 Nurses and Midwives protested staffing and wage levels outside Gosford Hospital on November 4, 2021.

Nurses and midwives were out in force on November 4, protesting the State Government’s latest public sector wage rises as they rallied outside Gosford Hospital.

NSW Nurses and Midwives’ Association (NSWNMA) members said they were stunned by the government’s decision to cut the public sector wage cap from 2.5% to 1.5% from next year, following on from a rise of just 0.3% this year, instead of the expected rise of more than 2%.

“We are routinely being asked to go above and beyond and take on extra shifts to meet the increased demand,” Pendrick said.

“We are often working shifts heavily understaffed and that’s not good enough for our community.

“On top of this, we cannot believe the NSW Treasurer announced yesterday they plan to cap public sector wages at 1.5% from next year.

“After freezing our wages at 0.3% this year, the State Government has no shame in kicking us while we’re down.

“Nurses and midwives cannot be expected to keep doing more for less.”

NSWNMA General Secretary, Brett Holmes, said the Treasurer’s decision to cap wages growth at 1.5% and hint actual pay rises could be even less from next year was opportunistic and economically reckless.

“At a time when the Government should be investing in wages and securing the future of our health workforce, they are locking NSW into a low wage, low growth future that will send nurses and midwives interstate,” he said.

“Workers in every city, every region and country town in NSW have woken up to this slap in the face from the Liberal Treasurer,” Catley said.

“The economic consequences of this decision will be felt for years to come and comes at the worst possible time for the state (as it faces) the daunting task of a post-COVID economic recovery.

“Removing this money from circulation in our local economies will have a devastating flow-on effect that will be felt in every town and down high street.

“It is contrary to all good economic sense.”

Shadow Minister for Industrial Relations, Adam Searle, said the move was an insult to every single worker who kept our society going during COVID-19.

“The teachers, nurses, and hospital cleaners on the frontline of the pandemic, along with the transport and administrative workers who kept the state moving deserve better than this,” he said.