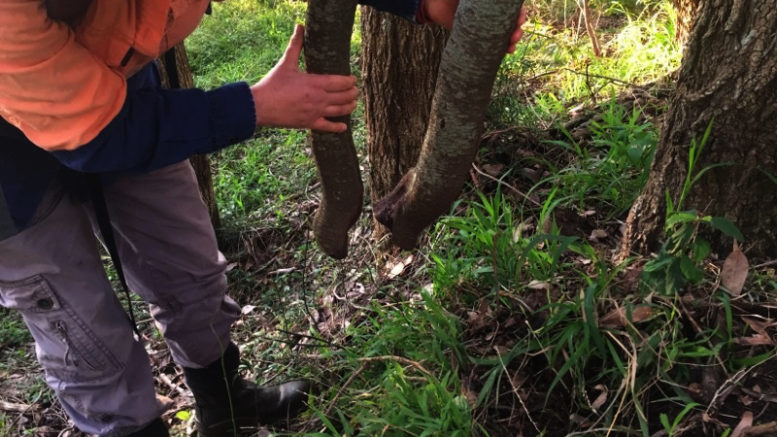 The group, who are within the Council’s Environmental Volunteer Program, noticed the damaged vines at their worksite in Araluen Drive Road Reserve.

Volunteer Toni Trent said several dense vines had been sawn off at the base, which was an “appalling act of vandalism”.

“A large and very old Monkey Rope native rainforest vine has been sawed off, and other vines including Pandorea Pandorana or Wonga Wonga Vine have also been vandalised,” Trent said.

“Of course, this means there is a lot of dead foliage in the treetops.

“Native vines are an important component in plant communities providing food and shelter to insects, animals, and birds.

Council’s Bushcare Officer has inspected the site and notified the reserve’s management staff to help with the investigation.

“Council staff are making further enquiries with the Pretty Beach Bushcare group and adjoining landowners to try and identify parties responsible for the damage,” a Council spokesperson said.

“We will also work further with Pretty Beach Bushcare to identify other appropriate ways of supporting the group and protecting the native flora of the area.”

Trent said this wasn’t the first act of vandalism in the area, with trees and plants previously poisoned and removed at the start of the track.

“The dog track is a precious community asset, and it will take a strong and caring community to stop this continued destruction of the vegetation,” she said.

Trent urges the community to contact the Council if they have any further information about the vandalism.