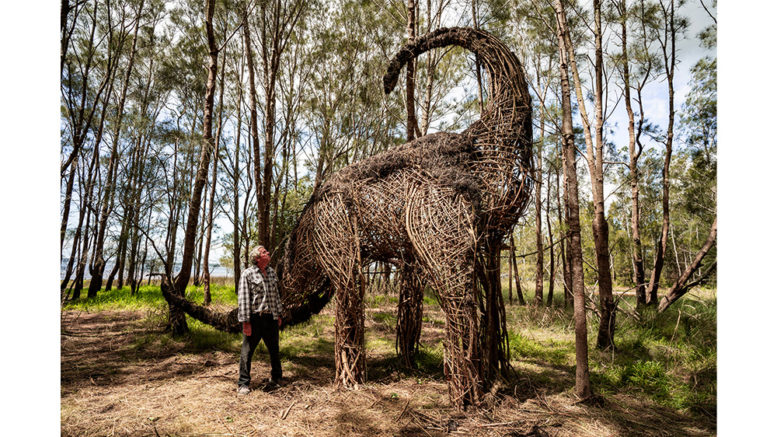 Pete Rush’s Jurassic journey up North has gone the way of the dinosaurs, with his latest and most ambitious creation, Lantanasaur, dismantled after a single complaint from a community member.

Made entirely from sticks, lake weed and woven lantana leaves, Lantanasaur was a whopping 7metres tall and 12metres long and stood proudly in the casuarina grove off Chittaway Bay foreshore before it’s untimely demise.

Speaking to the CCN, Rush said the work had been an experiment to see how high he could go with lantana.

“To keep me interested, my works always have to have some experiment involved.

“With the Lantanasaur, it was how big can I make something out of lantana leaves, and I really wanted to emphasise the lantana, because it’s such a great natural material,” Rush said.

Not too far from his previous work, Diprotodon, Rush said the Lantanasaur had taken him around three weeks to complete and that he had intended to leave it standing until week’s end, before the complaint came in.

Biting the bullet, Rush said he took the piece down early to stop the complaint from escalating further.

And while the Lantanasaur is now extinct, the artist can take solace in the fact that hundreds of residents had already made the trip to see the wonder beast, with the sauropod a particularly big hit with children, with many young families enjoying the work while they could.

“There’s been lots of families with little kids coming out to see it, all dressed up in their dinosaur gear, which was very cute to see,” Rush said.

Local photographers also had a field day snapping the colossal piece, with Lantanasaur to live on in their work.

And as a wise man once said, ‘life finds a way’, with Rush now planning to use the remains of Lantanasaur to construct a Loch Ness Monster in the lake.

While not going to be as grand an undertaking, Rush is hopeful his take on Nessie will give local kids something to smile about.