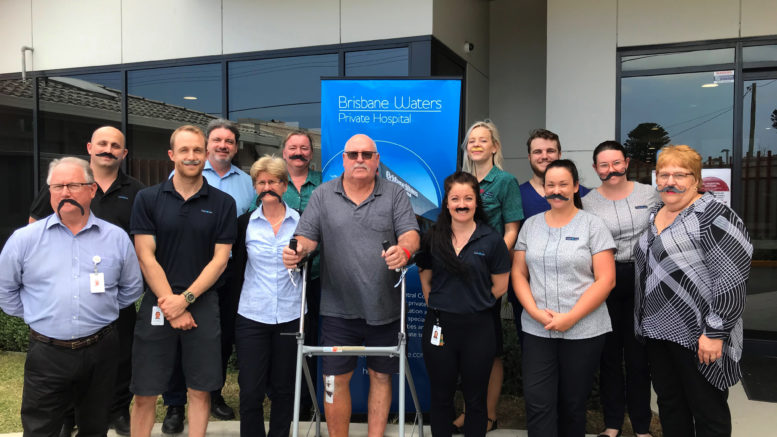 Brisbane Waters Private Hospital is joining its fellow Healthe Care facilities on the Central Coast in taking part in Movember, the annual campaign which encourages Mo Bros and Mo Sisters across the country to rally in support of men’s mental health, suicide prevention, prostate cancer and testicular cancer.

Movember’s APAC Country Director, Rachel Carr, said 2020 had been an incredibly difficult year for men, which makes this year’s campaign the most important yet.

“Research conducted by Movember shows us the effects of the pandemic on men’s mental health in particular, is concerning, and is still far from over,” she said.

“Signing up for Mo-season is also great way to stay connected within your own social circles; it’s been shown that supporting others can improve your own wellbeing.”

“The statistics show us men are anxious and uncertain about the future,” he said.

“Many guys are isolated and disconnected from their usual social support networks – and the places where men usually go to have those shoulder-to-shoulder conversations with their mates, like going out for a drink or a bite to eat, watching or playing sport, or going to the gym, have been severely reduced.

“We know men aren’t great at asking for, or seeking help at the best of times, so we need to do as much as we can to buffer some of the problems they’re facing, now.

“The programs Movember has delivered this year will make a meaningful impact going forward.”

“We’ve formed a team we’re calling Matt’s Morauders and we have nine staff members signed up and growing their mos,” Kelly said.

“My mo looks like something you’d see in a prison cell but it’s all for the cause.

“On November 3 we are going to do a re-enactment of a photograph from Anchorman – all in our uniforms with full moustaches.

“The rest of the staff is participating too through a number of staff lunches and fundraisers we have planned.

“Men are not so great at talking about health in general and Brisbane Waters Private Hospital gives amazing mental health support.”

You can sponsor the Central Coast Healthe Care team on the Movember website.

Lions give the gift of mobility