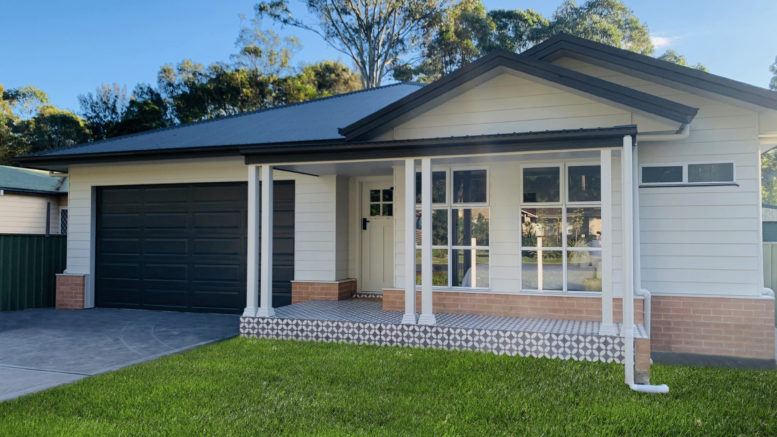 The award-winning home by Hotondo Homes

Five building companies in the northern suburbs have taken out major awards in the 2020 HIA-CSR Hunter Central Coast Housing, Kitchen and Bathroom Awards.

Hotondo Homes, based at Toukley, received the major Project Home of the year award, as well as the Project Home over $400,000 category.

Co-owner, Lyndsey Clarke, who runs the business with husband Jon, also took out the Business Partner of the Year award, which is for anyone “off-site” in the business who does a lot of work behind the scenes.

Polytec at Charmhaven and Somersby won an award for Industry and Product Innovation.

Tullipan Homes at Tuggerah was awarded for Professional Medium Builder/Renovator.

Baxter Homes, based at Tuggerah, took out the GreenSmart Sustainable Home of the Year award.

The awards acknowledge the talent of builders, contractors, designers and manufacturers who plan and construct quality new homes, townhouses, renovations, kitchens and bathrooms across the Central Coast and Hunter district.

Judged by industry professionals, winners were selected in 29 separate categories.

Lyndsey Clarke from Hotondo Homes said she and husband Jon were “over the moon” with the wins.

“We were very excited, especially as this is the third year running that we have won Project Home of the Year,” Clarke said.

“That made us feel just fantastic, to have three wins in a row.

“The home we won for is a four-bedroom single-storey house at Bensville.

“We like entering those sorts of homes because they are the homes we build regularly.

“This one has a Hamptons meets country feel, with lots of black accents.

“It is brick veneer with a clad façade and engineered timber flooring with raked ceilings toward the back which makes the home feel really large.”

Highlight windows and skylights add to the feeling of spaciousness, she said.

“This home is a great representation of what we like to build, a project home that breaks the mould for project homes.

“Our clients were fantastic to work with and we feel very lucky to now call them friends, like so many other clients we have worked with on the Central Coast.”

The couple came on board with Hotondo in 2016 as the youngest franchisees in the network at age 24.

“We are long time locals and love building new homes in the Central Coast region and introducing people to our beautiful area,” Clarke said.

“We employ eight fulltime staff members and loads of local trades, and pride ourselves on transparency and friendliness in what can sometimes be a daunting industry.”

“HIA members are dedicated to achieving the very best workmanship and standards in every project they undertake,” he said.

“HIA’s Awards provide a tremendous opportunity for our members to showcase their projects and highlight building and design excellence.

“HIA is delighted with the exceptional quality of entries and level of competition this year.

“In a year that has thrown up many challenges, all winners and finalists should be proud to have reached the pinnacle of excellence as demonstrated in these awards.”