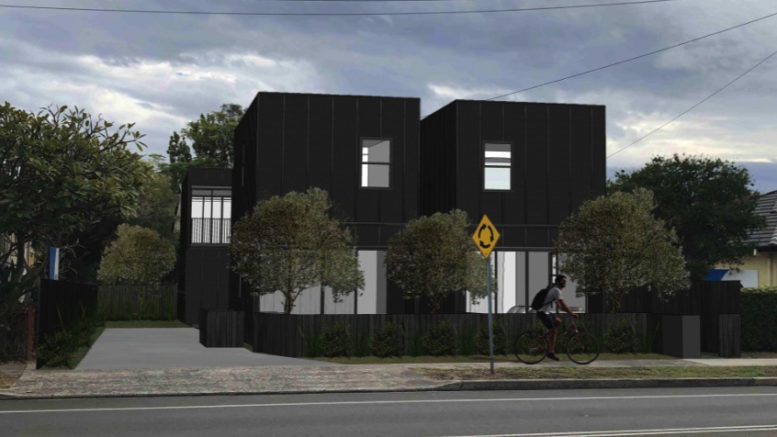 An artist’s impression of the new units

A $620,000 six-unit development in Ocean Beach Rd at Umina Beach has been given the green light by Central Coast Council.

The demolition of a 1950s building and ancillary structures will make way for two two-bedroom and four one-bedroom units, with access from a direct road frontage to Ocean Beach Rd.

Two objections were received to the proposal, with one submission referring to it as a “cluster of cheap and concerning residences accommodating people close to a vulnerable community of elderly and young”.

Another submission from near neighbours of the development posed privacy and security concerns.

It said the rear elevation of the proposed development would block sunlight and reduce the submitter’s property valuation.

It raised concerns that the “boarding house” type development would be cheaply constructed.

But a response to concerns raised said the proposed development is substantially under the specified floor space ratio and proposed setbacks meet the numerical requirements for over 50 per cent of all setbacks.

The portions of the development that do not meet the required setbacks have been designed with windows in locations that do not allow for any overlooking of adjoining dwellings to occur, the response says.

“The small unit sizes have been designed to offer a genuine downsizing opportunity to residents of the area, both new and existing, who may wish to reside in a more user-oriented space,” the response says.

“There is no link between small unit sizes and the attraction of criminals or unsavoury residents.”

The response says the development has been designed to locate living areas in positions so that no clear vantage point into adjoining properties can be found.

Documents lodged with the application describe 433 Ocean as a “thoughtfully considered collection of micro homes to provide modern simple sustainable and comfortable urban living for singles and couples”.

Construction is focused on carbon neutral design with low impact materials, high insulation and good ventilation and a focus on water conservation and energy efficiency.

“The buildings are to be constructed of natural toned weatherboard cladding, with feature aluminium vertical louvres, metal balcony balustrades, aluminium windows and doors, and a low-pitched steel roof with metal gutters, fascias and downpipes,” the documents say.

The documents say there is evidence that the region is becoming “far less affordable” with lower income older people, families and workers being increasingly displaced from many parts of the LGA.

It says the development will provide a positive social effect by providing additional and affordable and dwellings in line with Central Coast Council’s Affordable and Alternative Housing Strategy.

Pacific Link has a $1.4M surplus

Precedence is not acceptable for flaunting the rules