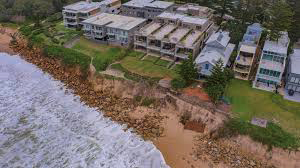 Tonnes of rock placed at North Entrance to prevent erosion

Central Coast Council does not intend to take the State Government’s decision not to fund emergency works at The Entrance North, following a severe erosion event in July, lying down.

Also, the government is only offering to fund half the cost of emergency works at Wamberal.

At North Entrance, just over 2,060 tonnes of rock were placed on the beach between Karagi Reserve beach access and Hargraves St beach access, at the direction of the Local Emergency Operations Controller.

Most of the rocks were brought in from Hunter Quarries at Karuah, with extra bags to hold them flown in from Japan.

The government announced on November 19 that it would award Council $992,501 for the Wamberal emergency work under the Coastal and Estuary Grants program, but a second funding application for the Entrance North work was refused, as the government says it does not meet the program’s guidelines.

For emergency work to be eligible for program funding, it needs to be identified in a certified Coastal Zone Management Plan, Emergency Action Sub-Plan or Coastal Management Program for the area.

A spokesperson said Council staff would continue to negotiate with the government to seek full reimbursement of funding for both locations.

“Council notes that there are provisions within the Coastal and Estuary Grants Program that allow for funding of works not included as part of a certified Coastal Zone Management Plan or Coastal Management Program, a matter that the State Government wrote to advise Council about on September 3,” the spokesperson said.

“On this basis it is disappointing that funding requests for works at The Entrance North have been declined.”