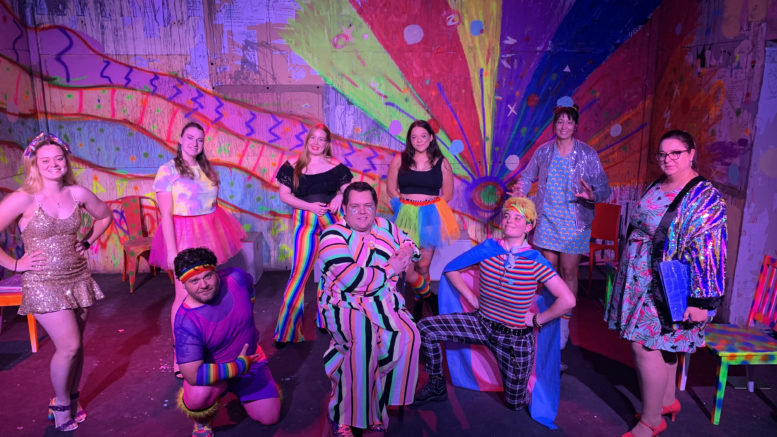 Josh Maxwell (centre) with the rest of the Gaybies cast Photo: Jopuka Productions

It’s been a short and bittersweet year for Tuggerah’s Jopuka Productions, with the company to end its 2020 relaunch season with the show that first thrust them into the spotlight.

The company has revived its highly political and deeply personal production of Dean Bryant’s Gaybies, which brought them universal acclaim in 2018, and helped solidify the then fledgling youth theatre powerhouse as a star on the rise.

A funny and moving piece of verbatim theatre that tells the story of children who have grown up with gay parents, Gaybies was written to give LGBTQIA+ families a voice following the Marriage Law Postal Survey, and draws from interviews with children aged between 4 and 40, to inspire and inform audiences on what it’s like to grow up in families that were once considered hypothetical and are now controversial.

The Chronicle caught up with Jopuka’s Founder and Creative Director, Josh Maxwell, to talk about Gaybies, the Covid curtain call and the future.

“My family’s own story is actually included in the script, so this was a truly personal production for me and it’s one of those shows that always gets emotional.

“Audiences always connect with it because these are real stories from real people, and it showed on Opening Night.

“We played to a full house, which is a lot less people than we’d normally have due to Covid, but I think that worked for it (Gaybies) because it’s such an intimate show to begin with.

“It was also my first time performing on stage in about five years, so it was definitely a night to remember,” Maxwell said.

Having started their year off with Emily Sheehan’s, Daisy Moon Was Born This Way, a sparklingly fresh take on a coming of age story about a girl grappling with her sexuality, Maxwell said the Gaybies’ revival was in a way bringing Jopuka full circle.

“It (Gaybies) feels like a great way to bookend our year and we’re all very excited to bring it back, before we turn attention to next year.”

With current projections putting Jopuka behind by $150K, Maxwell said the first six months of 2021 would test the company’s ingenuity.

“We’re still at a point where we can function, but having lost such a substantial amount after the pandemic, means that we’ll have to be inventive in how we deliver our productions, but I’m hopeful we’ll bounce back.”

“A lot of companies are hopeful we’ll be back to running full house performances by February, we’ll be keeping that in mind with our preparations, but right now we’re planning for the A-Z of possibilities in terms of what we can and can’t do next season,” Maxwell said.