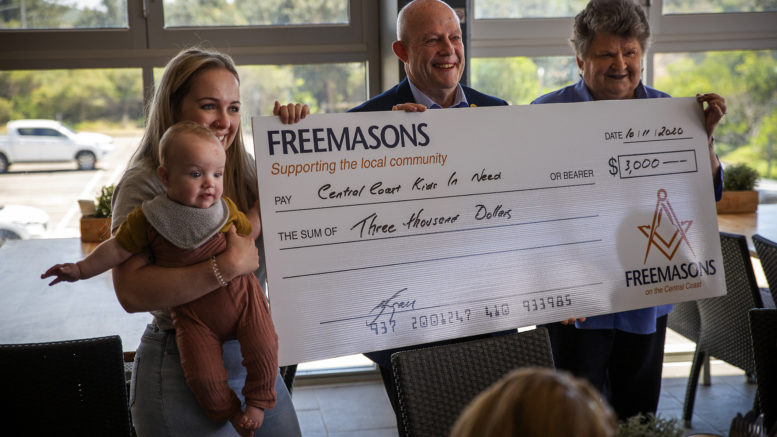 Freemasons on the Central Coast (FotCC) has donated a total of $6,000 to Central Coast Kids in Need (CCKIN) and Save Our Kids from Suicide (SOKS).

The presentation at Wamberal Surf Club was held a little differently, with the recipient organisations asking one of their beneficiaries to receive the donation on their behalf.

FotCC hoped hearing first-hand accounts from the people receiving the money would help them gain a real understanding of the impact and outcomes of their fundraising.

Victoria, a beneficiary of CCKIN, spoke of financial hardship of when their first child (Ella) was born with Down Syndrome.

When initially diagnosed, Ella was transferred to Sydney for a period of three months until her medical conditions stabilised and then on returning home, specialised equipment needed to be hired.

Victoria said the cost of three months accommodation, travel and sustenance was hard for her family and their continued residence on the Central Coast due to work commitments was financially and emotionally draining.

Their second child, Hudson, was born prematurely which required her to receive CCKIN support for the second time.

“My husband and me will be forever grateful for all the assistance given by CCKIN,” Victoria said.

“The accommodation and the travelling plus the support and comfort and talking to someone just seemed to lessen the stress.

“I would like to thank Freemasons on the Central Coast for their donation of $3,000 which I am sure Lorraine and Effy will use to CCKIN’s great benefit,” Victoria said.

Freemasons on the Central Coast have also supported SOKS, with the money helping to support a number of programs.

The Applied Suicide Intervention Skills Training (ASIST) trains people in identifying and approaching a person who is contemplating suicide, especially in a crisis situation.

Training for the participants in this program, which has mainly included teachers and school support staff, is provided by Lifeline.

‘Mind Your Sports Mates’ is a similar programme that trains people in identifying the symptoms of depression, anxiety and suicidal ideation.