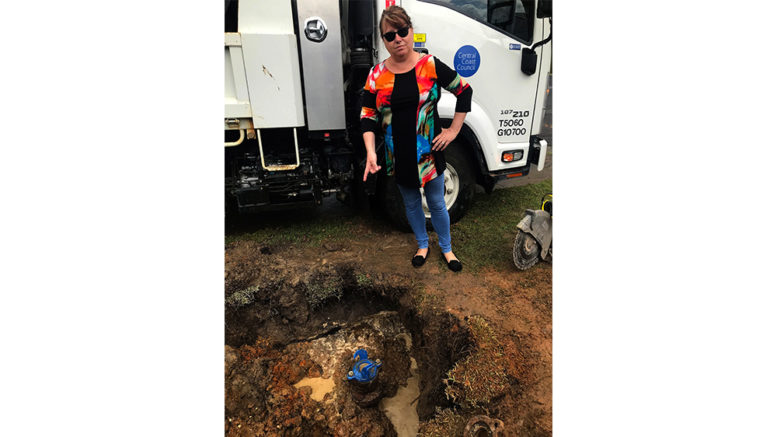 Patricia Trumm said the drama began on Tuesday, November 17, when what appeared to be a burst water pipe began to leak water onto the front yard of the family home.

“Council workers came that afternoon and told us they couldn’t do anything about it as they were not permitted to do overtime,” Trumm said.

“We woke on Wednesday to a tremendous flood in the front yard – the entire yard and garage were flooded.

“It took Council a while to turn the water off and it seems that impacted other homes.

“My daughter and I had to use a ladder to leave the house for work.

“We feel Council stuffed up and we were the sufferers.

“But we are also concerned that overtime bans might lead to more problems and wonder how many others will pay the price for Council’s incompetence.”

But a Council spokesperson said Council’s primary focus was continuing essential services for the community, which includes water and sewer services.

“Council received a call from the customer on the morning of November 17 reporting a leaking hydrant on Collard Rd,” the spokesperson said.

“Council immediately investigated the issue and had remediated the leak shortly after lunch.

“The crew then scheduled Council’s maintenance team for the next day to complete a more permanent solution.

“Council workers who work approved overtime are paid for their work according to the award.

“If there is an urgent issue that requires staff to work after hours, the community can be assured that Council staff will be onsite and will be paid for their work accordingly.

“Council staff prioritise all repair works across the Coast and staff left the site in good condition following initial assessment.

“Permanent repair works were prioritised for the following day.

“Unfortunately, overnight the issue got worse, and this can happen.

“Council received a call from the customer advising of the change in the morning and immediately escalated the priority repair and sent staff out.

“This fix was completed later that day.”

Peninsula receives two out of 36 grants