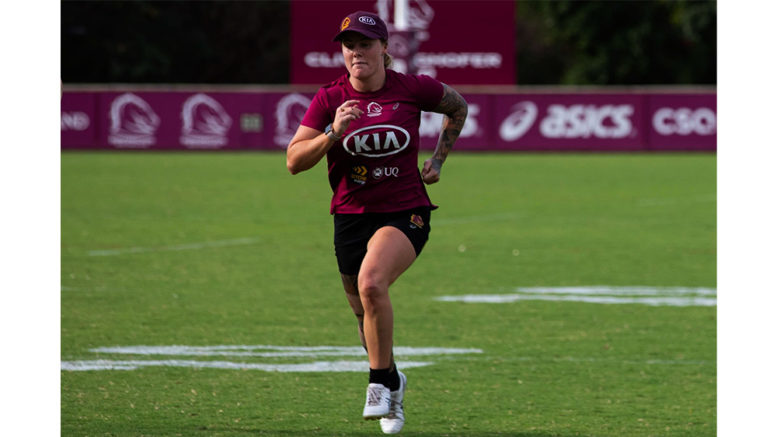 It’s been a long time coming, but Jayme Fressard couldn’t be happier with her NRLW debut.

The Tacoma South resident was part of the classy Brisbane Broncos outfit that secured their third successive premiership after their 20-10 triumph over the Sydney Roosters in the NRLW grand final, and The Chronicle caught up with her to talk league, life and the Central Coast.

Born in Gosford, the 23-year-old has been a Coastie all her life, and kickstarted her league career playing with the Berkeley Vale Panthers before joining the Premiership winning Central Coast Roosters for their inaugural season.

A rugby 7’s convert on the rise, a stint in the NRLW has been long overdue for Fressard, who first signed with the Broncos in 2018, before major injuries including a torn ACL, saw her out of commission for two seasons.

Back with a vengeance and turning heads at the Roosters, when the Broncos’ call came, she answered, with the speedy centre back touching down in Queensland with just enough time for a two-week quarantine before her first run on the paddock for the Maroons.

“I came out of quarantine with four days before my debut game, which was just crazy because four days to prepare is nothing, but I couldn’t be anxious because I was just so excited.

“The feeling of running out after waiting so long, it was just so sweet and a total dream come true,” Fressard said.

Playing and winning the grand final was the fairy tale ending to Fressard’s professional debut, with the final moments of the game something she’ll never forget.

“I had just caught the ball when the hooter went off and there was this split second before the realisation hit and then I just booted it into the air before all the girls were on me and we just celebrated.”

Now back home, Fressard has returned to her job as a wellbeing program mentor at Gorokan High School and a facilitator with Creating Chances.

Through Creating Chances, she has worked with dozens of local high schoolers to develop their leadership skills and self-esteem through various life skills programs.

Having had a rough time when she was a Gorokan High School student herself, Fressard said her work allowed her to be the mentor she wished she had when growing up.

“Sport was a huge factor in my life when I was at school.

“It gave me focus and purpose and that, along with some teachers who believed in me, is what got me through my HSC.

“Now I’ve gone full circle and am doing that for the kids at my old school, which is pretty special.”

But with a taste of the NRLW and a premiership now under her belt, Fressard said her footy ambitions had only grown.

“I’ll be taking a few weeks off to let the body recover, but preseason for the Roosters isn’t far away and I want to get back with them and hopefully have another great season.

“I’ll also be looking to re-sign with the Broncos and am keen for international games and opportunities with the Jillaroos to come back.

“Things are still unclear because of Covid, but my plan is to train hard and take opportunities as they come.

But what Fressard is most looking forward to is a return to normal.

“This was such a strange year, I wasn’t even sure if I’d get to play locally, let alone professionally, so I’m hoping things are back to normal by next year.

“No lockdowns, no quarantine, just a good normal season.”