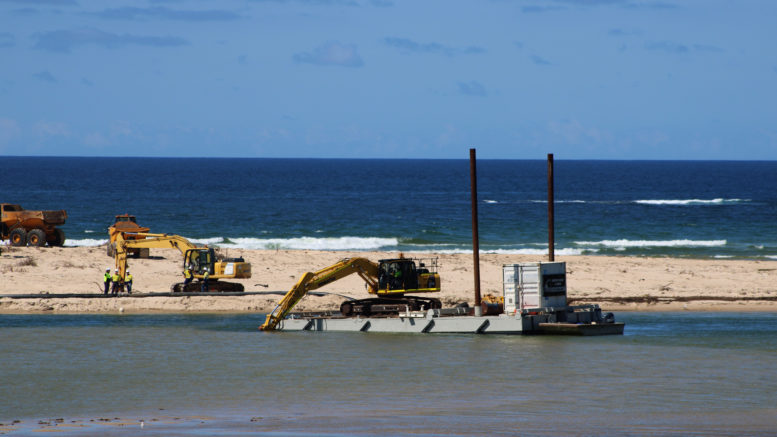 Dredging at The Entrance Channel

After calls for a flood management plan for The Entrance Channel, a visit to the site is on the list for Central Coast Council Administrator, Dick Persson.

He promised to visit The Entrance and find answers to questions posed by resident, Graham Hankin, who spoke in Open Forum at Council’s November 23 meeting about Tuggerah Lakes flood management and dredging The Entrance Channel.

“I won’t make any undertakings other than to say that I am genuinely interested and will visit the site and make a further statement and will take up your questions with senior management and get answers,” Persson said.

Hankin, a community member of Council’s advisory committee for the Catchments and Coast – Tuggerah Lakes, said in his speech that the amount of sand in The Entrance Channel was the deciding factor when suburbs around Tuggerah Lakes flooded.

“150mm of rain in 24 hours can cause roads to flood and residents to be trapped,” he said.

“After the Flood Risk Management Plan in 2010, dredging strategies were recommended as a high priority.

“Back then, one of the objectives during a major flood should be the emergency opening of The Entrance Channel.

“Instead Council has ignored the Flood Plan and allowed a natural disaster to unfold.”

Hankin said Council’s management of the February 2020 flood was a debacle and that locals could see the disaster developing.

“There were 5,500 residents severely affected, cars were written off, house contents destroyed and houses badly damaged, and a multi million dollar cleanup awaited.

Hankin said Council’s response was to do nothing until the flood was threatening infrastructure, and when the sand berm was finally excavated, within 24 hours, the lake level dropped 250mm, the channel was 100m wide and the lake level quickly returned to normal.

“A Flood Management Strategy, as recommended in 2014, would have reduced the flood level by 400mm,” he said.

Hankin said that when dredging started this year, Council advised that it was complete after only 25,000 cubic metres of sand was removed.

“They stated that the primary targets of water exchange and navigation had been met, and 143,000 cubic metres had been naturally pushed out of the Channel,” Hankin said.

“The Channel has been open since the February flood and an estimated 200,000 cubic metres of sand has been pushed back into the estuary as a result of the July storms.

“Today, there is still a very large amount of sand in the Channel, there’s no dredging action plan for next year, Council is still undecided whether early opening of the Channel will reduce flooding, and The Entrance North properties are still vulnerable.

“Where are the flood management and dredging action plans?” he asked.

“The locals have demanded a Channel opening action plan for a very long time.

“Why isn’t there a continuous Channel between the bridge and the ocean?

“Why is the training wall concept still being assessed as a solution?

“Where is the flood forecasting tool that other Councils have implemented?

“When will the flood warning guidelines be updated?

“Where are the flood evacuation procedures and flood markers?

“When will Flood Adaptation Planning be implemented?

“Where is the consultant’s report that confirms that opening The Entrance Channel early will lower the peak flood level?

“What was the financial cost of the February 2020 flood?

“The flood incident report would probably have all the answers and future recommendations, but like the 2007 flood, there is still no report,” Hankin said.