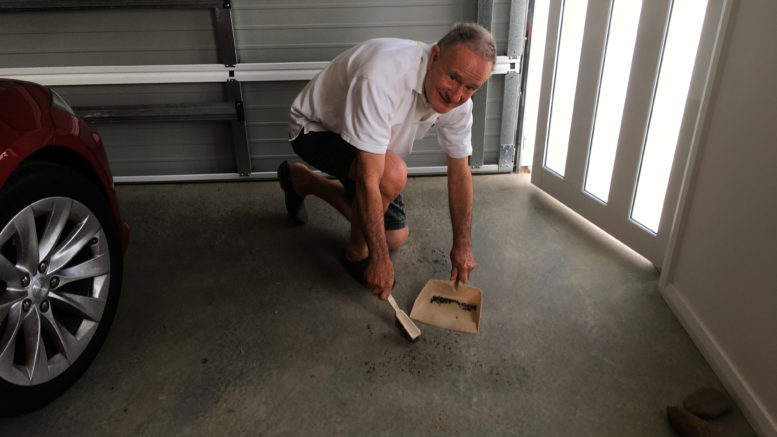 Hardy Albrecht collects some of the gravel in his garage

Copacabana resident Hardy Albrecht is set to send Central Coast Council a repair bill for damage sustained to his car through what he describes as a poor repair job done on Del Monte Pl earlier this year.

Albrecht says he wrote to the Council in March requesting an explanation for the “uneven” repair job completed a few weeks earlier and despite an acknowledgement of receipt of his email, he has heard nothing more.

“Del Monte Pl was sprayed with a tar substance and thereafter gravel was placed over this substance in an uneven manner,” Albrecht said.

“No consideration was given to dents or uneven surface in the road.

“Some spots near my garage drive had only tar and other dents in the road were filled with gravel without sticking to the road.

“After the procedure the road was superficially swept without reaching dents or emerging potholes.”

Albrecht said the result of the uneven repair job was pieces of gravel stuck with tar to his brake pads and disks.

“A mobile repair service had to come to my garage to remove pieces of gravel stuck with tar to the brake disks,” he said.

“I have swept my garage drive and garage floor many times and collected more than a bucket of gravel.

“My new garage floor is marked with tar from the car tyres because tar is exposed without gravel on the road.”

Albrecht said the repairs had been a waste of ratepayers’ money with a major upgrade of Del Monte Pl still in the pipeline.

Albrecht said there was still a lot of loose gravel on the surface of the road which continued to cause problems for residents in the street.

He said he was glad to see an Administrator installed at the Council.

“In my opinion the Council is over staffed and disorganised,” he said.

“One department doesn’t know what the other department is doing – hence the gravel treatment of Del Monte Pl just before a reconstruction of this road was started.

“I am not all surprised that the Council is in financial difficulties.

“The Administrator should now look at some of the people working there.

“I have no doubt that some Council staff are working hard and are dedicated to their responsibilities but others are unable to perform their duties and responsibilities.”

Repeated requests to Council for comment have gone unanswered.