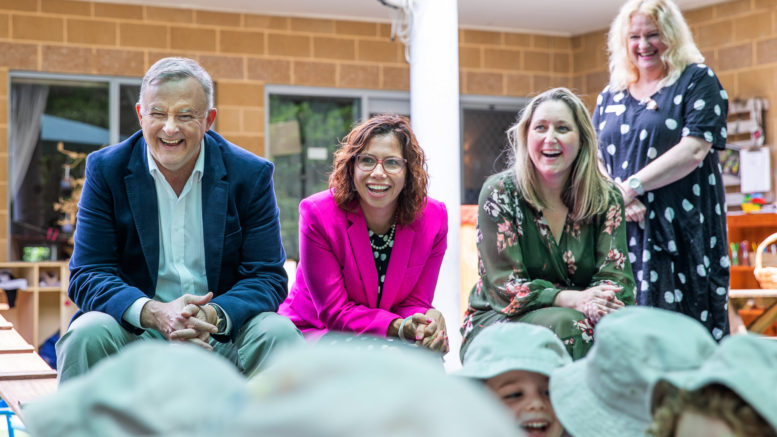 The Friday, November 13, visit coincided with the release of the Investing in Australia’s Early Childhood Infrastructure report from the Chifley Research Centre.

The report reveals that compared with the OECD average of 18 percent, Australian families bear 37 percent of the cost of childcare.

Childcare costs are expected to increase in Australia in the coming year by 5.3 percent.

McBride said they visited KU Ourimbah Preschool because a parent, Sarah, had written to her about the quality of early learning at the centre and her concerns that working families hard hit by Covid were struggling to balance the budget, especially in communities like ours.

“It’s been really, really tough, and unemployment and under employment is have a big impact, more so on women.

“Under employment of women in some parts of our community has increased to 34 percent,” McBride said.

“The current childcare subsidy scheme penalises those that wish to return to work,” he said.

“Many second income earners lose money if they work a fourth or fifth day.

“Labor’s Boost will remove these structural barriers that are holding second income earners, mostly women, back from work,” Albanese said.

“Labor’s commitment to remove the cap on the subsidy, to lift the subsidy up to 90 percent and improve the tapering so that 97 percent of families will be better off, will make an enormous difference.

“That’s why we regard this as an absolute priority and why it was the centrepiece of our Budget Reply.

“And that’s why now, more than a month after my Budget Reply, the government needs to do more than just simply say that everything’s all okay and that there’s nothing to see here when it comes to childcare costs,” Albanese said.