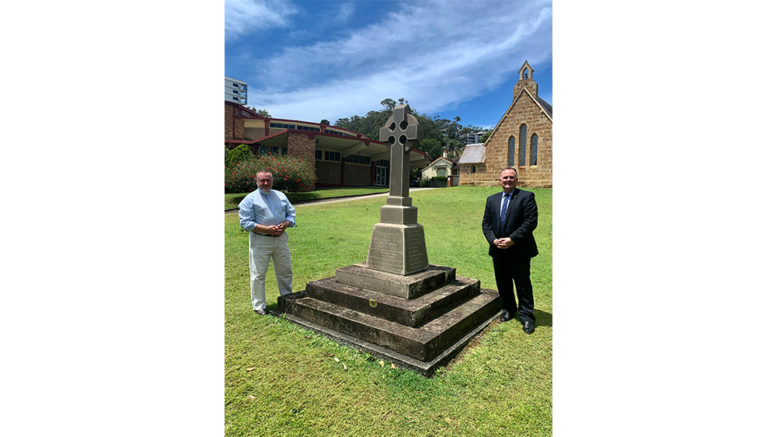 Father Rod Bower and Parliamentary Secretary for the Central Coast, Adam Crouch, at the war memorial

The Celtic Cross war memorial in the grounds of Gosford Anglican Church is to receive a $9,600 restoration, thanks to a grant from the NSW Government’s Community War Memorials Fund.

Parliamentary Secretary for the Central Coast and Member for Terrigal, Adam Crouch, said the cross would be hand-cleaned, repointed with lime mortar and repainted.

“This is one of the 18 successful projects for war memorials dating between 1919 and 1949 that require improvements such as conservation assessments, cleaning, environmental advice, honour roll repair, or upkeeps to War Memorial halls,” he said.

“I congratulate Gosford Anglican Church for successfully submitting this application for what is a highly competitive funding process.”

“It is great to be able to now properly restore the memorial.” Bower said.

“It is an integral part of Gosford’s history and this restoration will secure the memory of those men whose names are on it for another 100 years.”

Acting Minister for Veterans, Geoff Lee, said the commitment to maintaining and conserving war memorials had been ongoing since the fund launched in 2008.

“The NSW community has a proud history of military service, but many war memorials are now decades or even a century old, making conservation projects large in scale and often expensive,” Lee said.

“We will continue to support communities to honour our defence personnel and their families by backing projects that recognise their service and sacrifice.”

Central Coast organisations are eligible to apply for grants of up to $10,000 for conservation projects through Round 2 of the Community War Memorials Fund.

Applications are currently open and will close at 5pm on February 11.

Historical war memorial may be saved

WW1 memorial to be relocated