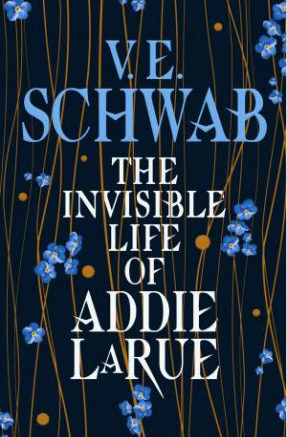 I was drawn to this book because I read that it was “in the vein of The Time Traveler’s Wife”, which I read years ago and loved.

One of those books that I couldn’t put down, couldn’t wait until the day was over and I could escape.

I was hoping for the same experience …

Adeline lives in a small town in France in the late 1600’s.

Her life is pretty much mapped out, she will get married, have children, raise children, die and never leave her town.

Just like the rest of the women from Villon – all except Estele.

Adeline’s mother thinks she will go to hell.

Estele doesn’t go to church and pray to the new God with the other people in town.

Adeline gets a taste of the bigger world when in 1698, at seven, her father, a wood worker, takes her on a trip to Le Mans to sell his wares.

To Adeline it seems to be “a hundred times the size of Villon”.

She has never seen so many people.

Her father will take her on this trip each year until, at age 12, Adeline’s mother doesn’t think it fitting.

A despondent Adeline runs to Estele for comfort.

Estele tells Adeline to pray to the gods but there are rules, “You must humble yourself before them. You must offer them a gift. Something precious to you. And you must be careful what you ask for … and no matter how desperate or dire, never pray to the gods after dark.”

Adeline is 23 now and too old to marry but there is Roger, recently widowed father with three small children.

Someone needs to help him.

Adeline’s mother says it is her duty to marry Roger.

In desperation she isn’t careful with what she wishes, “I want a chance to live. I want to be free. I want more time.”

The darkness grants Adeline her wish for the price of her soul.

She travels through the years free … 300 hundred years.

She is so free that no one remembers her.

She forms no attachments – everything she owns is eventually lost or broken.

The book jumps through the centuries, and countries as Addie survives.

She is visited by the Darkness (complete with hypnotic green eyes) each year to see if she is ready to give up her soul yet.

But each year she declines.

No one remembers Addie except in 2014 when she meets Henry, a book seller.

For some reason he remembers her and the two form a relationship.

But why does Henry remember Addie when no one else, in the past 300 years has?

I was hooked at the beginning but then got a little bored in the middle as the pace seemed to slow down and the story got a little redundant.

Luckily it picked up again with the introduction of Henry and his back story.

I had wondered why Addie would struggle through centuries, and she really did struggle, without giving up.

And while it wasn’t The Time Traveler’s Wife, I was not disappointed.