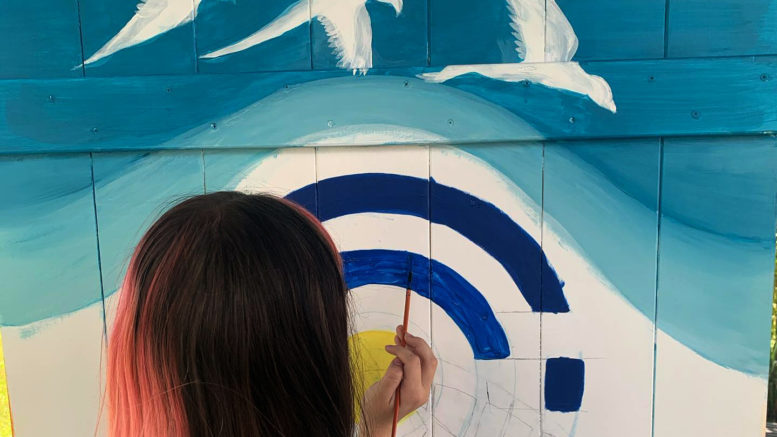 Painting of the Big Chairs is still underway

It was supposed to be a community art project that the North could be proud of, but mystery now surrounds Central Coast Council’s Big Chair Paint Out.

Held in the last week of September and first week of October at Lake Haven’s Gravity Youth Centre, the event saw a dozen youths come together to paint two specially commissioned giant beach chairs that the Chronicle understands are to be installed around Budgewoi and Canton Beach, but the project appears to have been derailed, with council unwilling or unable to answer questions about the status of the chairs.

Since September 29, the Chronicle has been attempting to get a statement from council outlining the timeline and costing of the project, as well as where exactly the chairs will be installed, but was finally told on November 2 by a spokesperson, that council would not be issuing a response, despite having over a month to prepare one.

With the chairs built and paid for and council’s two advertised painting sessions completed, it’s left this Reporter wondering where oh where are the Big Chairs?

Thankfully, staff at Gorokan High School were able to shed some light on the mystery.

According to the school’s Welfare Assistant, Heather Bond, GHS students had been heavily involved in designing and painting the chairs.

“Students from our Pride Group were approached by council to help design the artwork to be painted on the chairs and were also at council’s two advertised school holiday paint out sessions.

“For the past few weeks, they’ve also been attending the Youth Centre for a weekly painting session,” Bond said.

While not privy to council’s plans for the chairs once they’re completed, Bond said that students involved were very excited about the idea of having their art displayed to the public in such a unique way.

“The kids have thoroughly enjoyed being involved in the project and they can’t wait to see the Big Chairs once they’ve been installed out in the community,” Bond said.

When asked about the seeming secrecy over the project, Bond said that she was unaware as to why council would take such an approach to such a positive community initiative.