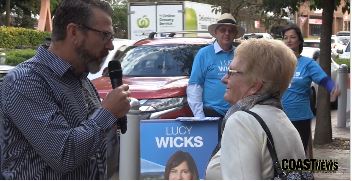 In reference to a letter from D. Horsfall, in issue 266; Horsfall assumes that Robertson MP Lucy Wicks will not speak up for the 80% of voters in that federal electorate who do support the ABC; yes, the Liberal Party would expect that from her.

The major party dominance in Australia’s Single Member District type of representation is therefore a huge problem for democracy.

That it is presented as a democratic system is highly questionable.

A majority did not actually vote for her.

If this was repeated in the 151 federal seats there would not even be an Opposition Party.

That would be quite legal.

In the US this desire resulted in gerrymandering.

In Apartheid South Africa the National Party moved its supporters through electorates to increase its majority and succeeded for 40 years.

The time has come for Australia to seriously look at Proportional Representation – Party List, used in 89 countries, not in Australia.

Have a very good look at New Zealand.

Our Senate is elected on a little used variety of Proportional Representation but with the positive result that minor parties and Independents are represented there, a much more democratic representation; so much so that both Paul Keating and John Howard attempted to reduce the power of the Senate!

It is a fair system, fairness being an important Australian value.

For example, what is fair about Adam Bandt of the Greens gaining just one seat in the federal Parliament, with 10.4% of the total vote?

The Greens should have 15 or 16 seats and if they had that kind of representation Australia would now have a credible, environment and energy policy.

Expensive roundabout will cause delays