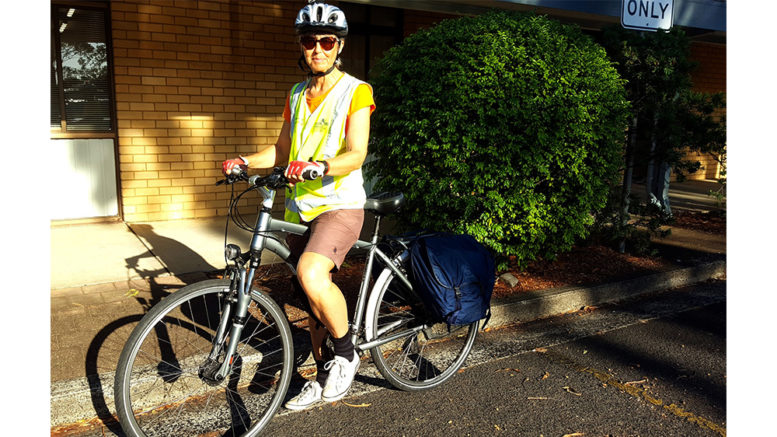 A Central Coast health initiative aimed at getting more adults active by increasing the number walking, cycling or taking public transport to work, is celebrating its 10th anniversary.

Since then, the Health Promotion Service has facilitated Central Coast GA2W Day gatherings in the William Street Mall, Gosford on every third Wednesday of the month.

It sees like-minded active transporters meet up for a ‘cuppa’ and chat, before getting back on their bikes or walking off to work.

As well as networking opportunities, members who sign up to the free GA2W initiative also receive resources and information to help them be more active.

“It’s fantastic to see our GA2W initiative reach this milestone, particularly at a time when being active is as important as it’s ever been,” Tebb said.

“Not only is cycling or walking to work a convenient way to get the vital exercise we need for both our physical and mental health, it’s also a much cheaper and greener way to travel.

“For short trips, it’s often faster than driving too.”

In 2019, well over a third (38.1 per cent) of people aged 16 and above living on the Central Coast were insufficiently active according to figures from the Household Travel Survey 2018-19.

The survey found 72 per cent of travel in the region is by private motor vehicle, while commuting for work-related business is cited as the reason for nearly a quarter (22 per cent) of household travel.

According to the 2016 census, more than 95,000 both live and work on the Coast, and Tebb believes this represents a unique opportunity.

“We’ve already got a very large pool of people on the Central Coast who could actively travel to work, and this is at a time when more have taken up cycling, walking or running as both a leisure and exercise activity because of COVID-19,” he said.

“This presents a great opportunity for the Coast to be a more active, healthy and sustainable region, and it’s one we will continue to champion through the GA2W initiative.

“Our monthly GA2W Day gatherings had a short break due to COVID-19 restrictions – which was the first time in our 10-year history we’ve had to cancel a meet-up – but physically distant gatherings have started up again.

“So whether you’ve been active for years, one of the many who have taken it up during the pandemic, or even thinking of giving riding to work a go, anyone is welcome to join us every third Wednesday of the month and on other occasions like Walk to Work Day and World Bicycle Day.”