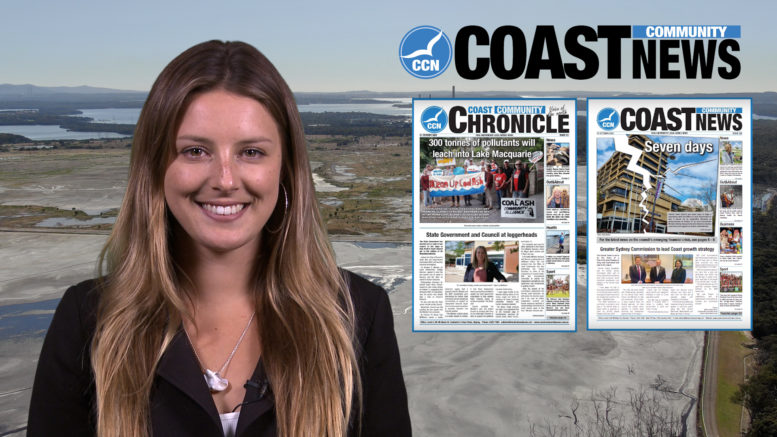 It has been another turbulent week for our Council, let’s go to David who will shed some light on the situation.

Well the proverbial hit the fan this week for Central Coast Council after it declared earlier that it didn’t have the cash to pay its staff. Local Government Minister Shelley Hancock formally announced on Wednesday she intends to dismiss councillors and appoint an interim administrator.

Council now has five days left to lodge a submission with the Office of Local Government on why it should not be sacked and an administrator appointed. We reached out to all councillors for comment, councillors Holstien and Mclachan and MPs Crouch and Harris made these comments.

There is A LOT of background to this story and Central Coast Newspapers journalists  have published a dozen articles in the last 10 days to provide you with vital information. Pick up a copy of today’s paper or visit our website for the stories you won’t read elsewhere.

The Central Coast is set to receive a new economic development Strategy in a major effort to bring new businesses and jobs to the region. The Greater Sydney Commission (GSC) has been given the task by Premier Gladys Berejiklian to rev up the local economy. Here is CEO of the GSC Geoff Roberts speaking at the announcement.

Some good news, Central Coast jobs vacancies increased to 1365 in September, an increase of 13% Month over Month and 14% Year over Year according to statistics compiled by local data analytics firm See-Change. . This may be a reflection of the excellent work done by Scott Goold of Central Coast Council in particular, as well as Paula Martin from Business NSW, who organised the recent Virtual Jobs Fair.

Thanks for that David. Now it has been a long complicated saga, but the proposed oil and gas rigs off the Central Coast, Sydney, and Newcastle, aka PEP11, has hit a significant milestone this week, starting with Liberal Member for Mackellar, Jason Falinski, tabling a motion in parliament to end the exploration licence. All coastal MPs besides MP Lucy Wicks have spoken for the motion to cancel PEP11.

Now the decision is in the hands of Federal, Minister for Resources & Water, Keith Pitt, and Deputy Premier of NSW John Barilaro. Minister Pitt said to the Newcastle Herald that he does support offshore gas exploration whereas NSW Minister Barilario says the NSW Government does not support PEP11.

We will keep you updated as the story develops but here is what Jason Falinski said about his motion when talking with Coast Community News out the front of Parliament House on Monday.

Some distressing news has come out this week for those living near Lake Macquarie, with The Out of the Ashes two report by the Hunter Community Environment Centre being released. We spoke to Environment Centre spokesperson, Jo Lynch, about the report.

Onto some lighter news, International fashion designer, Weave Dibden Neck, has created a raft from recycled materials as a way of promoting her new fashion label, Ukeyi-co. We spoke to her at the rafts official launch.

Thanks JC, The Terrigal-Avoca Panthers have done it again, winning the Hunter/Central Coast AFL Black Diamond Cup for the second year running. The Black Diamond cup is the oldest and continuous sporting cup in Australia’s sporting history, first awarded in 1888.

The Panthers played on Adelaide Street Oval last Saturday against the Newcastle City Blues, with the panthers coming out on top winning the game 76-50.

This win brings the Panthers total first grade premierships up to seven making them the second most decorated club in the Hunder/Central Coast AFL competition history.

And the Mariners have recently announced a key part of their 2020/21 A-League side on Wednesday with the addition of Oliver Bozanic. Bozanic left the Hearts at the conclusion of the shortened Scottish Premier League season. And with the new season starting soon, memberships are officially open this Monday.

And in other football news the mighty Barnstoneworth 45Ds – are playing in their first grand final in living memory against top of the table Budgewoi FC tonight at 7:45 pm at Pluim park. The 45Ds competition is hard and very entertaining, so get along if you want some late Friday night entertainment.

And now let’s have a look at the weekend weather. It looks like it’s going to be a rainy weekend with a cloudy Saturday and a high 80% chance of showers with a chance of a severe thunderstorm. There will be a max of 26 and winds will be northeasterly 15 to 20km/h tending northerly 20 to 30kmh before dawn and becoming light in the evening.

Sunday will be another cloudy rainy day with a very high 90% chance of showers. There will be a max of 19 and winds will be westerly 15 to 20 km, turning southerly 25 to 40 km during the morning.

All of these stories and thousands more are available on our news website and remember to pick up a copy of this week’s Coast Community News issue number 265 and Coast Community Chronicle 211. Be sure to subscribe to our Social channels for updates during the week.

We leave you today with exciting news for Gosford CBD which is set to be host to a new University degree. The Central Coast Conservatorium of Music (CCCM) and the University of New England (UNE) have formed a formal teaching partnership, allowing music students in the region to receive private music tuition locally, while completing their music degree online. We were there at the launch to hear what Music Director, Patrick Brennan, had to say about the exciting partnership.