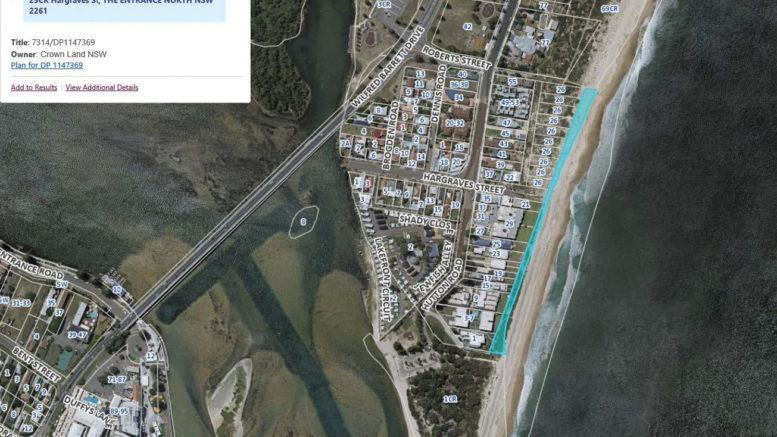 Heirs and/or successors of Edith Hargraves could be the rightful owners of beachfront land in front of homes at The Entrance North.

The Crown Land in front of the houses that faced the wrath of the sea during the winter storms could actually belong to one or more private individuals, it was revealed in a report to councillors for Central Coast Council’s October 12 meeting.

Councillors called for the report on future management of the beach, which explains the possibility that title of the land had incorrectly been issued in the name of the State of NSW and should be in the name of Edith Hargraves, or her heirs or successors.

Now, the Department of Planning, Industry and Environment, Crown Lands might seek to put the land, known as 25CR Hargraves St, in Edith Hargraves’ name.

Edith Hargraves, according to the website, Wyong Shire One Place Study, married, Walter Deniss, in 1891, and the pair built and ran Dunleith Guest House at The Entrance North.

In 1986, Wyong Shire Council honoured these early pioneers by naming the park in Hutton Rd the Walter and Edith Denniss Park.

The parcel of land now in question is about 3,800sqm in area, and extends 405m along the eastern boundary of a number of occupied properties, from Roberts St in the north, to 1 Hutton Rd in the south.

The width of the parcel varies but is generally around seven metres in width.

The Roberts St properties were severely impacted by coastal erosion during the series of ocean storms experienced throughout winter.

In February, the Department of Planning, Industry and Environment, Crown Lands, told Council that departmental officers were of the opinion that title of the land had incorrectly been issued in the name of the State of NSW and should be in the name of Edith Hargraves or her heirs or successors.

“Staff research indicates that Edith Hargraves (also known as Edith Denniss) passed away in 1950 and no comprehensive search for her heirs or successors has been undertaken,” says the report to councillors.

“It is possible that the department may seek to take action to have Lot 7314 DP 1147639 put in the name of Edith Hargraves or her heirs and successors, given the view of some of its officers that title to that lot has been issued incorrectly in the name of the State of NSW.”

The report said this would complicate management of this beach area, and opportunities for adjoining owners to undertake private coastal protection works, should they wish to do so.

Staff have recommended that Council request the land remain under the ownership of the State as that appears to be correct but, if not, the State should take the appropriate action to acquire the title from any successor to Edith Hargraves.

The NSW Department of Planning Industry and Environment (DPIE) identifies The Entrance North locations as a significant open coastal hazard.

During the recent storm and erosion emergency, coastal protection works were undertaken by Council on this land, as directed by the Local Emergency Operations Controller under the State Emergency Rescue Management Act.