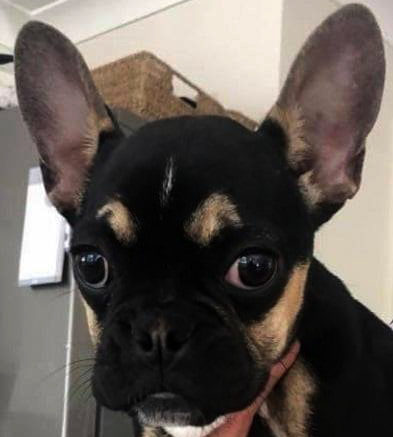 When it comes to reuniting lost pets with their owners, Dee Walton never gives up, and it’s that tenacity that’s saved two lives.

The Central Coast Animal Care Facility Manager regularly takes on the role of super sleuth to track down owners good and bad, so when a very expensive, very emaciated French bulldog puppy turned up at the facility in September she immediately suspected something was amiss.

What followed was a long search that resulted in little Jenna’s owners being hospitalised.

“I actually first learned about Jenna through the local lost and found dogs Facebook page.

“A woman found her and had taken her to a vet assuming she had escaped her yard.

“She was microchipped, but the lady had no luck reaching the owners and was copping a bit of flack from the group for holding onto the dog, so she brought her to us at the pound,” Walton explained.

“Seeing her, straight away I thought to myself that something was wrong.

“Frenchies are a very expensive breed.

“People don’t buy these kinds of dogs without keeping them close, so I just felt there was more to this,” Walton said.

After her own unsuccessful attempts to contact the owners via telephone, Walton visited their Erina home.

That visit further cemented her idea that things were not as they seemed.

“When I arrived, no one answered the door despite there being a car in the carport.

“I also noticed the very visible garden shed was open with some very expensive tools just laying around, which again, didn’t add up.”

After approaching next door neighbours, her suspicions were further aroused when no one had seen the husband and wife who lived there for around three weeks.

Determined to unravel this mystery, Walton and her team at CCACF contacted police to arrange a welfare check, but when nothing eventuated, she turned to social media to try and locate relatives.

“I just started messaging people with the same surname, asking if they were relatives and informing them that I had the couple’s dog and had been unsuccessful in locating them.

“After eight messages I got a reply from the husband’s nephew.

“After he couldn’t get a hold of them either, he put me in touch with the man’s sister.

“She confirmed that no one in the family had heard from her brother recently, including his doctor, and that got alarm bells ringing.

“She then met police at the property and after they couldn’t get a response, they ended up breaking in and finding the couple semi-comatose,” Walton said.

It’s understood both parties live with mental health conditions which are believed to have triggered a health episode.

Both were rushed to hospital for treatment.

The woman has since been released into the care of relatives.

The man is still undergoing treatment after losing half his body weight.

Their dog has also been placed into the care of family members.

It’s an outcome that could have been much darker had Walton not persisted and she’s hopeful this story will serve as a reminder about the importance of staying connected.

“A lot of people that suffer from mental health problems suffer in silence, which is why we need to be there for each other.

“Life gets busy but it’s so important that we remember to check in with one another and make sure the people we care about are okay,” Walton said.

For the animal lover this experience is also validating of her never give up approach when it comes to reunions.

“We could have easily just gone ‘the owner hasn’t come forward let’s rehome the dog’, but at CCACF that’s not what we’re about.

“We strive to locate owners and find out about their situation so we can see if there’s any way we can help them with their animal.

“It doesn’t always work out, but my team don’t call me Ace Ventura Pet Detective for nothing.”

International Year of the Nurse and the Midwife celebrated