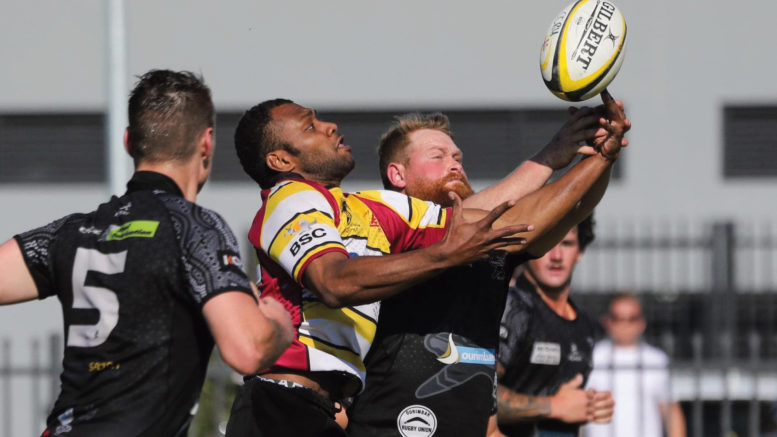 The stage has been set for a blockbuster climax to Central Coast Rugby Union’s Premier 1 Competition, with The Lakes to meet Terrigal in the decider.

It comes after The Lakes defeated Ourimbah in the preliminary final over the October long weekend, 32-29.

Two titans of this year’s competition, CCRU President, Larry Thomson, said that both sides put it all on the line in pursuit of the grand final.

“Ourimbah opened the scoring in the ninth minute when they kicked a penalty goal, but it did not take long for The Lakes to respond.

“Ourimbah scored next to reduce their opposition’s lead to 12-8 and at that stage the match was proving to be a real arm wrestle,” Thomson said.

The score line shifted again in the dying minutes of the first half, when The Lakes scored a penalty goal and a converted try to balloon their lead out to 22-8 heading into the second half.

“The Lakes continued to attack right from the start of this half and with a further penalty goal and another converted try, they took a very commanding 32-8 lead 10 minutes in.

“At that stage it seemed that The Lakes were safely home, but once again, for the third week in a row, Ourimbah fought back,” Thomson said.

“They crossed for a try to make the score 32-15, but it was not until the last five or so minutes of the match that they really made their move.

“They crossed for two late converted tries to bring the scores to 32-29.

“The Lakes however held in those last few tense moments to record a very meritorious victory.

“Ourimbah would be most disappointed with the result and would once again be upset at the fact that they let The Lakes take such a handy lead before they got fully into gear,” Thomson said.

The result sees The Lakes poised to meet Terrigal in next weekend’s grand final at Central Coast Stadium as underdogs, having been unable to overcome Terrigal in any of their fixtures in the regular season.

Terrigal are also last year’s reigning Premiers and this year’s Minor Premiers, so The Lakes will have their work cut out for them, but as Thomson says, anything can happen in grand finals rugby.

The Premier 2 grand final mirrors the Premier 1, with The Lakes set to meet Terrigal.

The Lakes won through last week after beating Terrigal in the major semis and Terrigal made it in off the back of their preliminary final win against Avoca Beach over the weekend.

As the grade’s reigning Premiers, The Lakes will be looking to replicate last year’s success but know that they cannot underestimate Terrigal, who almost pulled off the comeback in the major semi.

The Under 19’s grand final will see The Lakes Maroons face Avoca Beach.

It comes after the Maroons defeated their brothers The Lakes Yellow in the preliminary.

An evenly fought affair, the match ultimately came down to the Maroons’ early lead seeing them through a second half resurgence from their opposition, a trend for The Lakes across all grades this season.

Going into the grand final after losing to Avoca in the major semi, the Maroons know they’ll have to be more than just good to claim the premiership.

The President’s Cup grand final will see Terrigal meet Avoca Beach, as will the Women’s 10’s.