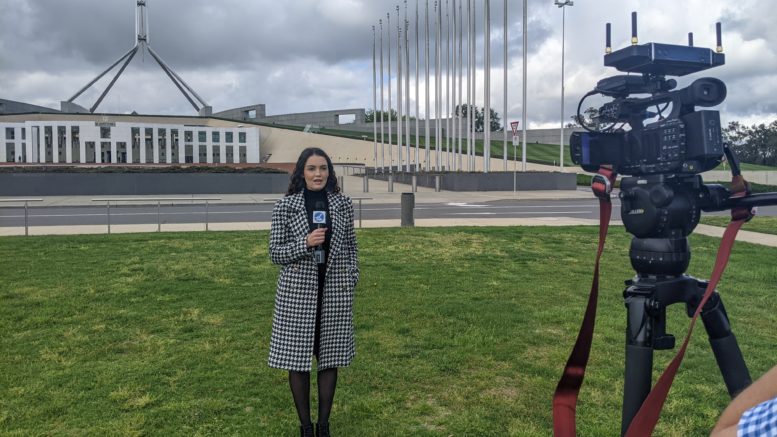 Journalist Hayley Macmahon. CCN reported on the debate outside of Parliament House as new COVID restrictions restricted entry to MPs and staff.

A Motion to put an end to oil and gas exploration off the Central Coast may never be put to the vote in Federal Parliament.

After thousands of hours of volunteer work and petitions spearheaded by the community group, Save Our Coast, the Motion to end the licence of PEP11, which allows for offshore exploration on a large stretch of the eastern seaboard from the Sydney Basin to Newcastle, was tabled in the House of Representatives and later debated in the Federation Chamber on October 19.

However, the debate has been adjourned, and there are indications that the Motion will never be voted on.

The Motion was put forward by two Liberal MPs, Member for Mackellar, Jason Falinski, and Member for Wentworth, Dave Sharma, with the licence set to expire in February 2021.

“I am calling on the Government to oppose oil and gas drilling off the coast of Sydney, and specifically in the PEP11 zone,” Falinski said.

“My community has spoken loud and clear, we do not want to see the renewing of the PEP11 licence.”

In an interview with Central Coast Newspapers, he said the motion was under consideration by the Scientific Committee with a decision to be made before February.

“My hope is that we never have to pass this Motion and that the federal and state governments will decide not to renew the licence, so the Motion will lapse because it will become meaningless,” he said.

“I’m not really hoping for a political outcome; I’m hoping for an actual outcome, which is that the exploration stops.

“This all started three years ago when I was approached by Save Our Coast who explained to me how they were very concerned about PEP11.

“When I started looking into it, there was some seismic testing done shortly thereafter, which produced no meaningful results.

“It seemed unfair on all the communities from the Central Coast down to Wentworth and the eastern suburbs of Sydney, that this exploration was going on when there was no clear intention for anyone to do anything about it.”

Founder of Save Our Coast, Dr Natasha Deen, spearheaded a community campaign and a petition which has gained more than 76,000 signatures in opposition to the licence.

She spoke on ABC radio on October 19 and called on all MPs to support the Motion to cancel PEP11.

“As of today, it is a little disappointing that Member for Robertson, Lucy Wicks, has not supported her Liberal colleagues, but we are very hopeful that our MPs will listen to the community,” Deen said.

Independent Member for Warringah, Zali Steggall, who has also supported the Motion, said she was presented with the petition earlier in the year by Dr Deen.

“Natasha and Save Our Coast have done an amazing job in mobilising awareness of this issue,” Steggall said.

“It’s been a long journey, but this is very important.

“We presented the petition to Parliament in February to put a stop to this fracking and seismic testing.

“This was an important first step because it actually led to the government announcing that seismic testing would be cancelled.

“Now we need the second step, which is to get rid of it altogether,” Steggall said.

Member for Dobell, Emma McBride, also spoke to Falinksi’s Motion and said she opposed offshore drilling and testing for petroleum off the Central Coast.

“The prospects of oil spills or gas rigs off the coast just kilometres from the coastline is awful, and locals are acutely aware of this risk,” McBride said.

“Last year, over two million people visited the Central Coast, and the tourism and hospitality industry are major industries for the region.

“This Motion won’t be voted on, this decision is to be made by Ministers Pitt (Federal) and Barilaro(NSW).”

Member for Robertson, Lucy Wicks, did not speak for the Motion in the chamber and it is still not clear what her position is.