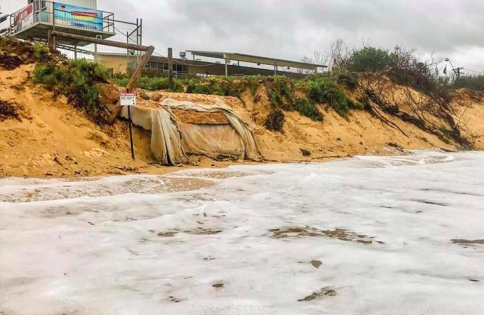 The erosion of our beaches is distressing.

None of us wants to see our beaches disappear or homes collapse into the ocean.

But there is nothing new about storms causing sudden and shocking damage to beaches and beachfront properties.

What is new is the severity and frequency of these weather events due to climate change.

And it is in that context that we need to assess what we do next.

Wamberal Beach, very close to where I live on the Central Coast, was buffeted by storms in July of this year, removing seven metres of sand and leaving properties at risk of collapse.

Property owners are now calling for a seawall to protect their houses and surrounding infrastructure.

Wamberal has seen this before.

That stretch of beach has been vulnerable to erosion for as long as anyone can remember, and the sand has never replenished easily.

In the 1970s, storms saw several houses surrendered to the sea.

Back then, there were fewer and more modest houses than those we see along the stretch now.

Back then, it would have been a much easier task for the government to buy back the land and to restore it as a frontal dune.

Instead, an improvised seawall was constructed and in time covered over with sand.

With the problem supposedly buried, bigger and more expensive properties were constructed along the strip.

Faced now with the decision between, on the one hand, building a sea wall for at least $20M or, on the other hand, buying back these properties for more than 10 times that amount, the choice looks deceptively simple.

But building a sea wall is the more expensive option in the long run, and it is also the least equitable.

Building a sea wall simply moves the problem – it will shift the erosion to the end of the sea wall and slow the replenishment of the beach.

It will protect these houses by making coastal erosion someone else’s problem – our problem – by putting other homes and businesses at greater risk, while threatening to wash away our public beaches.

And where do we stop?

At North Avoca, North Entrance, Copacabana, McMasters, Pretty Beach — and that’s just on the Central Coast — as well as of course Coffs Harbour and the Northern Beaches?

And as the years pass, and predicted sea level rises are realised, is the plan to prop up all the properties sitting on the coastline with sea walls?

Even best-case scenarios will see sea level rises setting beaches back by hundreds of metres by the end of the century.

The impacts on all structures along the coastline will be devastating.

There has to come a time when we stop doubling down on our mistakes and start doing things differently.

The Wamberal Beach Management Options Report, prepared for the Office of Environment and Heritage in 2017, considered a cost benefit analysis for 8 options.

It found that none of the engineering options, including different types of sea walls, with or without beach enrichment, would provide a net public benefit for the local community and visitors.

Only a planned retreat would provide greater benefits than the status quo.

These are not subtle differences – planned retreat has a cost benefit 7-10 times greater than any other option.

The report details the loss of the majority of the beach due to the construction of a sea wall, and states that the benefits of a sea wall to beach-front owners would be outweighed by the net costs to the wider community, including business owners.

The impacts on the economy of Terrigal and Wamberal would reverberate throughout the Central Coast.

It must be fair, transparent and carried-out with good consultation and supports.

But it’s something we have to get used to.

The Western Australian State Government has a policy of planned retreat for developed coastal areas subject to erosion.

So does Byron Shire Council.

Planned retreat has been used elsewhere to protect residents from bushfire and flooding.

It will become more common with rising sea levels, and councils along the NSW coast will need the support of the state government and their local MPs as they grapple with the changing shape of their LGAs and the impacts on planning, services and local economies.

We cannot hold back the ocean.

It is a triumph of baseless optimism and hubris to think that we might.

It gives false hope to affected residents and sacrifices our public open space and a longer stretch of coastline.

We need to come together as a community to understand the science and assess the options.

The response now must be guided by what’s best for the whole community and for ecosystems up and down the whole of the Coast.

Rudeness shown by Member for Terrigal

Was it party politics that forced resignation from Risk and Audit Committee?