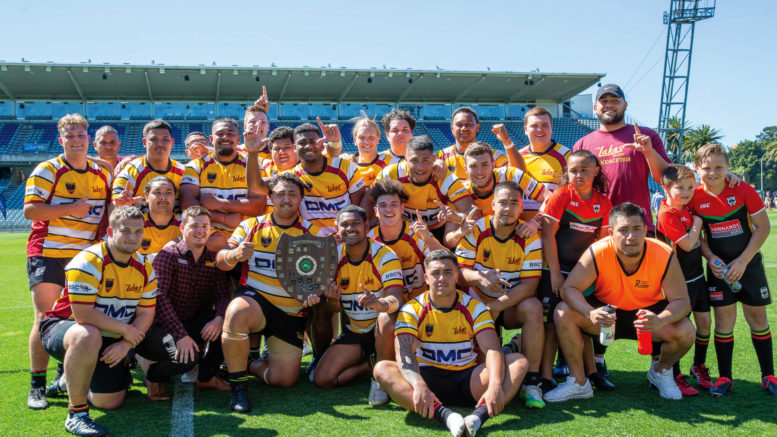 Five new Premiers have been crowned following the climactic conclusion of the 2020 Central Coast Rugby Union Competition over the weekend ending October 11.

In the Premier 1, Terrigal made it back-to-back titles after beating The Lakes, 31-28.

Going almost point for point from start to finish, CCRU President, Larry Thomson, said the Premier 1 grand final was a thrilling end to the season.

“Terrigal opened the scoring with an early penalty goal, but it was The Lakes who crossed for the first try in the 10th minute.

“The conversion of this try and a penalty goal in the 15th minute had The Lakes with a handy early lead of 10 points to 3.

“However, Terrigal quickly responded with their first try to square up the match at 10 points apiece at the 20 minute mark of the first half,” Thomson said.

Despite The Lakes reclaiming the lead through a penalty goal, an undaunted Terrigal outfit found their momentum from the 30th minute of play and did not relent.

Keen to equalise, a determined The Lakes outfit came out firing in the second half, crossing for two tries in the first eight minutes to reclaim the lead 25-22.

Reinvigorated, The Lakes continued to play some exceptional rugby, keeping Terrigal scoreless throughout the remainder of the half, but likewise Terrigal’s own defence kept The Lakes from widening their lead.

With play going from one end of the field to the other, Terrigal were able to equalise off the back of two penalty goals in the final quarter, before Five-Eight, Adam Danckert, broke the deadlock in the dying minutes of the match to secure Terrigal’s win.

In the Premier 2 grand final, it was more heartbreak for The Lakes, who went down against Terrigal by the narrowest of margins.

“There was absolutely nothing in this match throughout,” Thomson said.

“The Lakes went to the halftime break leading by 20 points to 10.

“While The Lakes had the slightly better first half, it was Terrigal who proved the stronger in the second half.

“Terrigal crossed for a try early in the second half and with The Lakes having kicked a penalty goal, The Lakes led in the match by 23 points 17 with time running out.

“Just when it seemed The Lakes would hang on for victory, Terrigal crossed over for a try in the corner right on the fulltime siren, to make the score 23-22.

“A conversion from the sideline saw Terrigal take the Premiership after fulltime in another extremely close and hard fought grand final,” Thomson said.

But it wasn’t all doom and gloom for The Lakes, with The Lakes Maroons beating Avoca Beach 23-14 to claim the Under 19’s Premiership.

Despite being another point for point affair throughout, better play making ultimately secured the Maroons the title, with a converted try right on the siren cementing their victory.

With the sun now set on the season, Thomson said it would go down as one of the most memorable in CCRU history after a complicated year.

With the end of season also comes the CCRU seasonal awards.

Normally announced at an end of year presentation, due to the pandemic, this year’s awardees were announced following the conclusion of the grand finals.

Club Person of the Year was awarded to Hornsby’s, Dee Carroll.

Coach of the Year went to Terrigal’s, Michael Farrelly.

Club of the Year went to Avoca Beach.