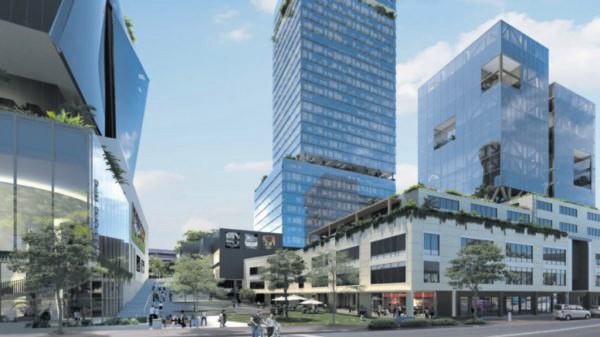 Submissions have closed on a $300M mixed use precinct proposed for a large block of land opposite Gosford railway station, with the Department of Planning now calling on the proponent to address concerns raised by respondents.

Among the major concerns raised by submissions of objection were the heights of the three towers proposed for the development, excessive floor space ratios and overshadowing.

To be located between Mann, Faunce and Watt Sts and incorporating the existing Gateway Centre which fronts Mann St, the development would include a hotel, commercial and retail premises, entertainment options, student accommodation and seniors housing.

Three towers would be split by a large public plaza of landscaped green spaces, activated by restaurants, bars and cafes and providing a connection between Gosford CBD, the railway station and the bus interchange which operates opposite the site.

Central Coast Council’s submission called for more information on overshadowing possibilities of open space and adjoining properties, more detail on the Faunce and Mann Sts corner and social and economic impacts and benefits.

It also raised concerns over the height of the towers, which were echoed by Central Coast Local Health district (CCLHD).

CCLHD’s submission also called for more information on the composition of residential and commercial/retail components and the anticipated number of people to be accommodated.

The Community Environment Network (CEN) and the Central Coast Community Better Planning Group (CCCBPG) were both also concerned about floor space ratios and height of the towers, with CEN also highlighting reservations about the project design and impacts on the public domain.

CCCBPG also had concerns regarding overshadowing and the effect on view corridors to the ridgelines of Rumbalara Reserve and Presidents Hill.

While the group supported the public plaza between the towers which it said would open a new view corridor between Burns Park and Rumbalara Reserve, it was not happy about the removal of the pedestrian overbridge from Burns Place to the Gateway Centre which it said would create a conflict of pedestrian movement across Mann St.

The owners of 139 Faunce St, opposed the project on the grounds that it would cause a devaluation of their property, create significant noise and vibration disturbance due to construction, which would impact its tenant, a community radio station, and cause overshadowing, privacy and safety concerns.

Statistician Patrick Spedding of Copacabana lodged the only submission in favour of the development, saying it was a “badly needed initiative in support of Central Coast economic development and socio-economic initiatives”.

Spedding said the Central Coast LGA has the highest homelessness count in NSW and one of the lowest rates of building approvals in Australia.

His submission said the region had been badly hit by the recession caused by COVID-19, with huge job losses, particularly in the construction industry.

“Another important factor is that the Central Coast currently has very low residential rental vacancy rates, with locals being pushed out of the rental housing market due to demand from Sydney,” the submission said.

“This lack of available supply is also driving up rents, reducing affordability.

“It is clear that the Central Coast desperately needs these kinds of innovative, forward-looking initiatives, in support of economic growth and socio-economic sustainability.”