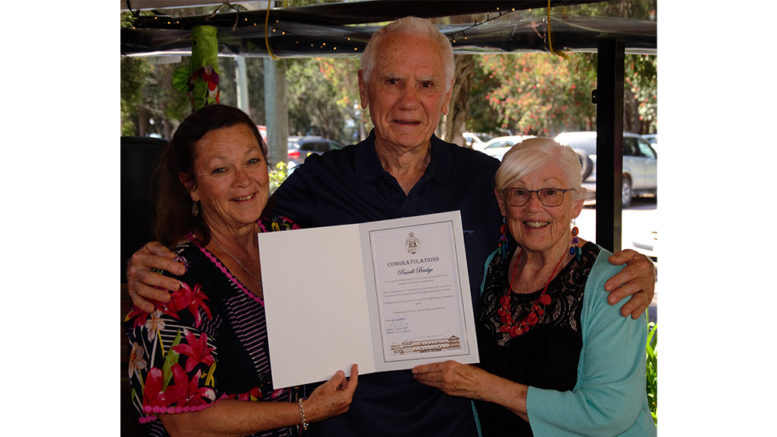 He’s helped his community keep fit and active for the past 10 years and now Gwandalan’s Russell Bridge has been honoured for it.

The 79-year-old was the recipient of a Parliamentary Certificate of Recognition for 10 years of community service for his efforts with GASPAHA, or the Gwandalan and Summerland Point Active Healthy Society, to the uninitiated.

Having lived a very active life before settling on the Coast, Bridge was dismayed to learn that the place he and wife Suzanne had chosen to spend their golden years had little to offer them for physicality.

“We were avid cavers, skiers and bushwalkers, so it was a bit of shock when we shifted to Gwandalan and realised that there wasn’t a thing to do in the local area.

“I took up walking and long distance swimming in the lake, but it wasn’t enough, so I decided to do something about it,” Bridge explained.

That desire led him to the Tunkuwallin Community Hall, the eventual home of the Society.

The disused community sports hall was the perfect place to launch a new fitness venture, so Bridge got himself certified as an instructor and with the support of his wife and friends, Patrick and Marie-Jeanne Dedy, launched the GASPAHA in 2010.

Since then, Bridge believes over 300 seniors have worked up a sweat in his gentle but comprehensive exercise classes, with many from that first class still turning up a decade later.

But helping locals feel the burn isn’t all he’s been up to in that time.

A born performer, Bridge has also been heavily involved with Tuggerah Lakes Chorale Society and Wyong Musical Theatre Company over the years.

All born in 1941, the trio sang at 10 local nursing homes a month before Covid set in.

Closer to home, Russell and Suzanne are also credited with establishing the Gwandalan Community Hall Drop-In Centre, a bi-weekly social endeavour where local seniors could pop in for a cuppa and company.

While no longer running, the centre has been credited with forming new friendships and providing a sense of community in an often isolated corner of the North.

Suzanne is also at the helm of the community hall’s craft group, the Golden Girls, whose members regularly meet to weave, stitch and sew for charitable causes.

When asked why the couple had given so much of themselves over to their community, Bridge said it was an urge that came naturally to them.

“We are practicing Christians and believe that being community minded is a part of putting our faith into action.

“And it certainly helps that the community here is so fabulous.

“I am constantly amazed by the lovely people that I deal with and in the whole time that GASPAHA’s run, there’s never been a single issue or problem in the group and I think that’s a testament to the people here.

“In a way it feels like what we do is just a catalyst for them.

“They’re the ones that make it happen,” Bridge said.

But for friends of the Bridges they see it differently.

Stephanie Milne is one such friend who helped coordinate a special surprise certificate presentation for Bridge to coincide with the 10 year anniversary celebration of GASPAHA.

She believes the Coast would be a better place with more people like the Bridges.

“Russell and Suzanne are the ‘someones’ that people often refer to when they say ‘someone needs to do something’.

“We definitely need people more like them in our future,” Milne said.

Choosing to be part of the solution