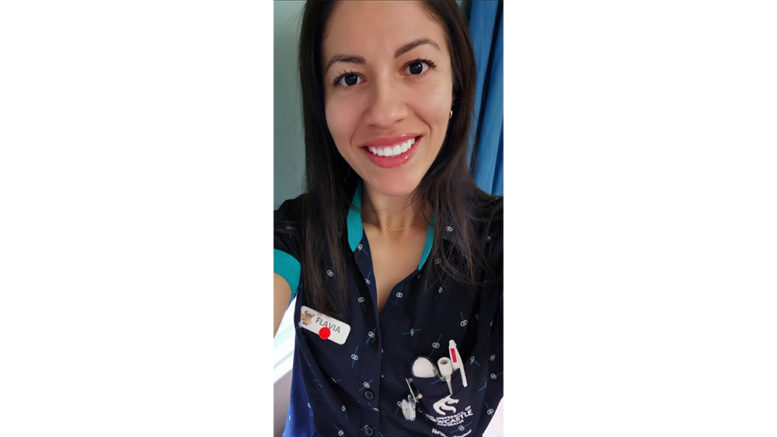 Dedicated to improving the lives of Central Coast residents by encouraging community participation in higher education through the University of Newcastle’s (UON) Ourimbah Campus, Central Coast Community College and local TAFE campuses, every year the CCCF appoint a hardworking local striving to improve themselves through education, and Souza is no exception.

Born and raised in Brazil, the 25-year-old came to Australia to learn English.

After becoming fluent and falling in love with the land Down Under, she decided to stay.

Living and working in Sydney in various administration roles for a decade, Souza moved to the Central Coast in pursuit of a more peaceful life, but with that relocation came another important life decision, what was she going to do with herself?

Settling on a new course, in 2017 Souza enrolled in a Bachelor of Nursing at UON.

“I longed to work in a job where I could interact directly with the people I was serving.

“I wanted to see that I was making a difference to people’s lives instead of continuing to look at an office brick wall.

“And I have always wanted to be a nurse,” Souza explained.

The first year of her course was taken over two years, but years two and three have been full-time, with support from CCCF allowing her to finish the final portion of her degree without having to worry about her financial situation.

Souza is now looking to gain employment as a nurse through Gosford Hospital’s Newgrad program.

She also wants eventually to pursue more formal study, either through an additional Paramedic year of the Bachelor of Nursing, or a Master’s degree.

Either way, her special love is aged care.

This she discovered through her employment in the sector and through course practicums with elderly patients.

When asked what aspect of her studies she especially valued and whether there was anything that could be bettered, Souza said: “I most valued being taught to be culturally aware and to respect the wishes of the patient.

“You don’t just tell patients what’s best for them anymore, you ask them what their wishes are.

“Some of the course timetabling was not ideal for an employed student like me, say a lecture in the middle of the day rather that in the morning or evening when it would be less intrusive on one’s job, but the course content was great.”

CCCF Honorary President, Sonnie Hopkins, said it was the CCCF’s pleasure to acknowledge the efforts of people like Souza, who recognise that learning has a dual benefit as a means to being a greater help to others and as enrichment in one’s own life.