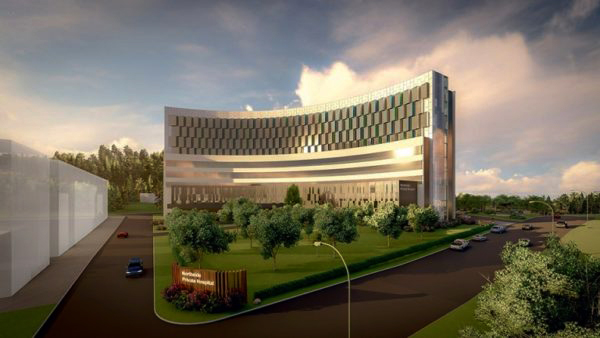 The proposed $350M Northside Private Hospital and medical precinct at West Gosford has progressed to the next stage of consideration, with the proponent having lodged a response to concerns raised in submissions on the project with the NSW Planning Department.

The proposed development, a joint project with the Northside Group, is being considered for approval as a State Significant Development and would see two large buildings, ranging from four to 11 storeys on a site between Racecourse Rd and Faunce St West.

The proponent has offered solutions to some of the concerns raised, including a suggestion for improved connection of internal and external public spaces and a plan for increased plantings and landscaping on the site.

In response to concerns raised that the development would exacerbate traffic congestion in the area, which also includes Gosford Hospital, the racecourse and three schools, the proponent says traffic movement is already a strategic problem.

“While the development will impact (this) to a degree, the impact made to future conditions would be negligible,” the response says.

One of the major concerns raised in submissions from Friends of Gosford and the Community Environment Network (CEN) was the fact that the development exceeds height and floor space ratios as set down in Central Coast Council’s State Environment Planning Policy (SEPP).

But the response says that suggested excesses are acceptable under Clause 8.4 (4) of the SEPP.

“Although the development contains a tower component, the intensity of the overall development is softened through landscaping areas and the use of basement parking,” it says.

The complete response can be found on the Department of Planning’s Major Projects website.

The Department will now proceed with consideration of the project as a State Significant Development in view of concerns raised and the proponent’s response.