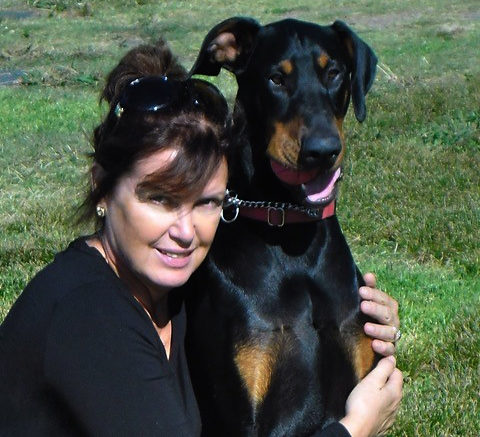 A Central Coast cancer survivor has released a book sharing her story in hopes it will encourage others to get checked and not ignore potentially harmful health symptoms.

Janette Cox’s book, Cancer: My Dog saved my life, is a true account of how her Doberman, Harvey, sent her warning signs about the fallopian tube cancer developing in her body three years ago.

Two years later, Cox is now cancer-free but said she owes her life to her beloved dog, believing she would not be alive without his warnings.

“It happened on three occasions, the first was when he was out with me playing ball; he walked straight into me with his nose which is not something he has ever done before,” Cox said.

“He hit me really hard on my pubic bone, but I brushed it off as I didn’t understand what he was doing.

“On the last occasion, he slammed into me, and this time it hurt.”

Looking back, she recalls experiencing some minor symptoms but didn’t take them seriously until Harvey tragically passed away a week after his final warning.

She said the shock, grief, and these unusual warnings convinced her to book a doctor’s appointment.

“I don’t understand why but the penny dropped, and I thought I have got to go to the doctor,” she said.

Two weeks later, Cox went into surgery and was later told she had developed cancer near her uterus which had not been picked up by a pap smear test five months earlier.

“My dog was not trained, but he smelt it and was trying to warn me something was going on,” Cox said.

“They have a terrific sense of smell, and there are chemicals given off with cancer which dogs can seek out.

“All I can say is that the angels guided him.”

Cox has now fully recovered and wants to share her message with women and men across the country.

“You can’t ignore symptoms, and that is the big message I want to send,” she said.

The 82-page book, Cancer: My Dog saved my life, can now be purchased online.