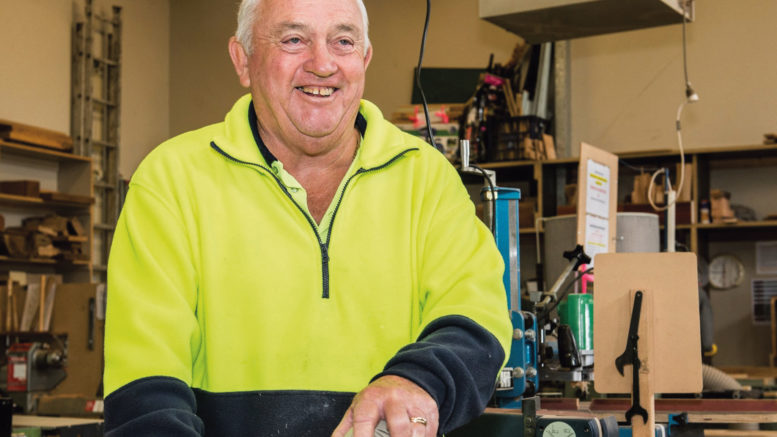 The Entrance Men’s Sheds Cec Baker, putting the finishing touches on a cheeseboard

While 2020 has been full of ups and downs, it was business as usual at Men’s Sheds around the Coast during National Men’s Shed Week (September 28 to October 3).

From Mannering Park to Bateau Bay, all seven of the north’s Men’s Sheds are different, but the one thing that they have in common is their purpose, to give blokes a shed.

A fresh take on the backyard shed, Men’s Sheds give men a place to meet, work and connect, with the movement now recognised internationally as a champion for men’s wellbeing.

‘Shedders’, as members have come to be known, come from all walks of life, with that diversity key to a shed’s prosperity, as Shedders share their stories, skills and expertise with the group.

At the woodworking focused The Entrance Men’s Shed, mateship and skill sharing are the norm, but according to Shed Secretary, Terry Anderson, National Men’s Shed Week went by without much fanfare.

Instead, Shedders have been focused on ensuring that their 40 strong membership can enjoy equal access to the shed under current Covid restrictions.

“At the moment, we can only have 16 people in the shed to comply with social distancing, but as we’re only open three days a week, we’ve had to start rostering members on and keeping a really close eye on the numbers.

“It’s been tough because we’ve got blokes who’d come in everyday if they could, but it is what it is,” Anderson said.

Despite those challenges, Anderson said that there was plenty of work to go around, with the shed receiving a steady stream of odd jobs from the community since reopening.

“We’ve got all sorts of fellas in the shed and we’re very fortunate in that one of our executive members is a timber joiner by trade, so the shed has been able to accept a lot of jobs that have helped keep us in the green during the pandemic.

“We’re lucky to have such skilled members sharing their expertise.”

In the past, The Entrance Men’s Shed was also well known for rolling up its sleeves to support the community, with Shedders working on a number of projects with local aged care providers, schools, businesses and other community groups.

Due to the pandemic, they’re limited in what they can do now, but Anderson said members had a hand in a few big projects this year.

“We actually built the chairs for Central Coast Council’s upcoming Big Chair Project, and earlier in the year, we made a few takeaway kits for our visiting disability group, and worked with St Vincent de Paul Society to create some accessible garden beds for people in wheelchairs,” Anderson said.

Like at The Entrance, National Men’s Shed Week went by without much fuss for the blokes at Bateau Bay Men’s Shed as well, who’s President, Fred Murray, said they were happy running their own race.

“We’ve got over 100 members, so for us it’s just been first in best dressed,” Murray explained.

With metalworking and woodworking their core disciplines, Murray said comprehensive cleaning and sanitising had become the norm at the shed.

“We’ve got a lot of distancing and sanitising procedures in place and the boys have been very compliant because they know it’s for their own good.

“We miss being able to welcome the public and things like our school holiday program, but at the end of the day, members have their own stuff to get on with and they’re happy to be keeping themselves busy,” Murray said.

One thing that all Men’s Sheds can take away from this year’s National Men’s Shed Week is new historic legislation enacted by the Parliament of Australia, granting Men’s Sheds the opportunity to apply for Deductible Gift Recipient (DGR) status from October.

“This change to the law means that for the very first time, individual Sheds (which successfully apply) will be able to receive tax-deductible donations directly from individuals and businesses.