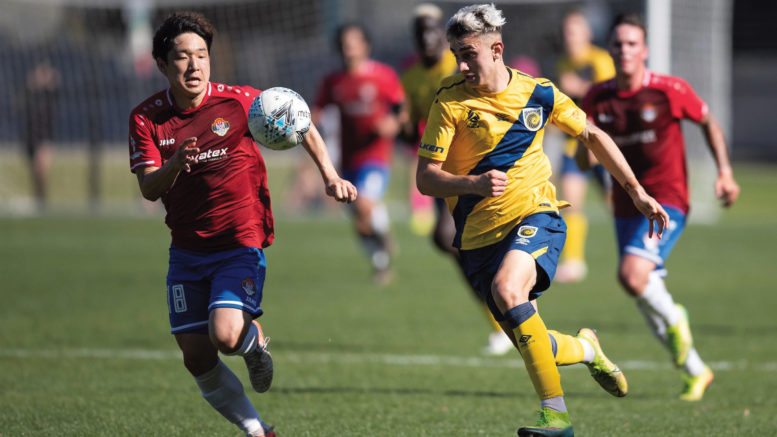 The Mariners NPL2 Men in action against Bonyrigg

The Central Coast Mariners NPL2 Men’s side are grand final bound after pulling off a 2-1 win over Bonnyrigg at Pluim Park on Sunday, October 4.

The win had some sense of déjà vu about it, with the two sides having met to decide the Premiership just a week ago at the same venue.

Desperate for revenge and a place in the grand final, Bonnyrigg took the lead just 10 minutes into the second half with a long range strike that found the bottom corner of the net, but the Mariners responded brilliantly just two minutes later in the 57th minute, with a headed goal from Alou Kuol to level the scores.

With momentum now behind the hosts, the go-ahead goal was scored in the 67th minute by Max Balard, following a goalmouth scramble that won a grand final ticket for Nick Montgomery’s team.

“They’ve put a lot of hard work in to win the league last week, and nothing comes unless you work for it, and today, we were the better team.”

The Mariners were the highest scoring team in the NPL2 competition, so understandably, Monty had some tough choices for this game.

He opted for Kuol, who broke into Alen Stajcic’s A-League squad earlier this year.

“He’s been building ever since he came back from the A-League,” Montgomery said.

“It’s been a big year for the boy, he’s gone from playing in Shepparton in Victoria to playing in the A-League.

“He’s a diamond of a kid and I thought today he deserved his goal.

“He was physical and showed fantastic technical ability too.”

Montgomery’s Mariners now look to the weekend, when they’ll take on the Northern Tigers at Valentine Sports Park to decide this year’s Championship.