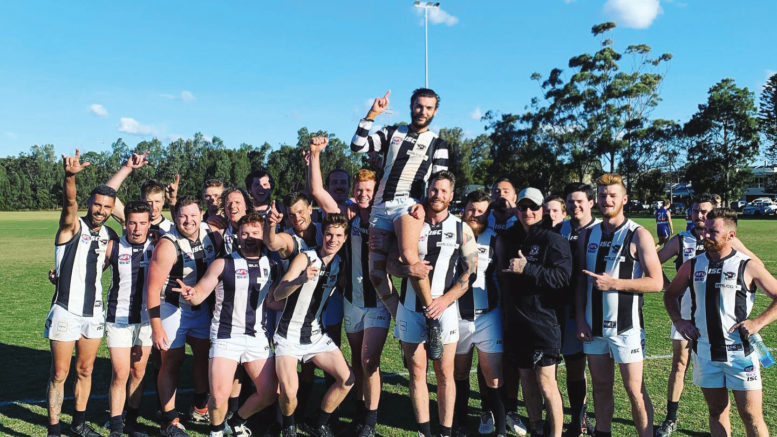 It’s survived one major rehash, a council amalgamation, flooding and a pandemic, but after seven long years, the new sportsground amenities at Tacoma’s Don Small Oval are finally complete.

Replacing the original Wyong Lakes Magpies AFL Club building that was destroyed in a suspicious fire in 2013, the million dollar redevelopment has delivered a major overhaul of what remained of the dilapidated facilities, and was formally opened on September 30.

Featuring new male and female toilets, an accessible toilet, canteen, clubroom, changerooms, umpires’ room and storage areas, the new building is set to be a gamechanger for its principal users, the Magpies and Central Coast Cricket, with the project funded through a collection of multi-government and agency grants.

For the Pies in particular, the completion signals a new era of prosperity.

“This has been very exciting for everyone at the club.

“Our seniors and juniors have all gotten to play a home game with the new facilities open, and it’s been nothing but compliments.

“Everyone’s just walking around with the biggest smiles on their faces.

“It’s been such a good way to end what’s been a pretty crap year,” said Pies’ President, Simon Wood.

According to Wood, the standout feature of the new building was its nuanced design, which he said perfectly catered to the needs of AFL.

“Initial designs for the changerooms catered to more traditional 11 a side codes, but with AFL, it’s 22 per side, so the changerooms needed to be much bigger to accommodate that.

“I’d like to thank council for incorporating that change.”

The other major feature that Wood is particularly pleased with is how the overall build has given the women’s sport a boost.

“While both male and female facilities have been upgraded, the ladies’ in particular stand out to me.

“Before the new building, women had a public toilet with just one cubicle.

“It was a last resort for many and was a detriment to women’s inclusion in sport at the Don, but now, they’ve got a private bathroom, only open during field hire, with five cubicles and three basins.

“The new facilities meet contemporary standards and I’m excited at what that means for all women’s sport coming to the oval,” Wood said.

Having waited seven years for the build, Wood said that the completion was very much the beginning of a “new chapter” for the Pies.

“Personally, I see this as our new beginning.

“Anyone who knew what we had before the fire knows what a fantastic asset the old clubhouse was, and after seven years of making do, it’s impossible not to be excited for what’s next.”

Council’s Director of Environment and Planning, Scott Cox, said the new building would also help service the northern community’s ever growing sporting needs, with all other codes that utilise the oval able to benefit from it.

Parliamentary Secretary for the Central Coast, Adam Crouch, said the NSW Government contributed $259,000 to the project.

“This is yet another example of NSW Government funding benefitting the Central Coast by supporting local sport clubs, as well as encouraging locals to enjoy our fantastic open spaces,” Crouch said.

“I visited the construction site in May and I was delighted to be back for the opening and to see how the new clubhouse allows Don Small Oval to be better utilised by residents in Tacoma and surrounding suburbs.”

Mayor Lisa Matthews praised the Magpies for their patience and efforts to secure additional funding for a replacement sports amenities building for the community to use.

With the future looking bright, Wood is encouraging other northern based codes to come check out the facilities and see if Don Small could potentially work for their sport.

“The sheer size of it opens the door for things like interschool competitions and regional events, so I encourage the public to come down and see what all the fuss is about.”