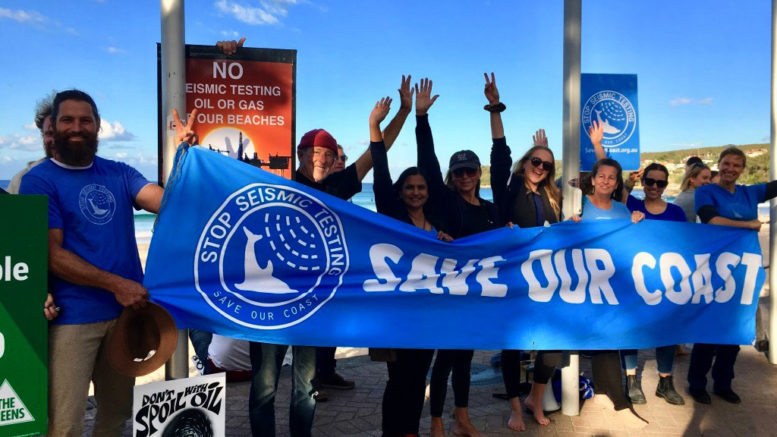 Save our Coast continues to agitate for cancellation of PEP 11

Pressure continues to mount for State Deputy Premier and Minister for Regional NSW John Barilaro and Federal Minister for Resources and Water Keith Pitt to cancel the PEP 11 licence for offshore gas exploration when it comes up for renewal in February next year.

The two Ministers form the Joint Authority, with which the final decision on the future of PEP 11 lies.

While holder of the licence Asset Energy has already abandoned its plans for seismic testing, the licence could still allow for drilling for gas off a large portion of the eastern seaboard, including the Central Coast.

A recent motion from Liberal Federal Member for Mackellar Jason Falinkski to cancel the licence was accepted by the House of Representatives last week, with nine MPs, both Liberal and Labor, speaking in favour and none speaking against.

Environmental not-for-profit Save Our Coast has been campaigning for the end of PEP 11 since 2018, has amassed 76,000 signatures on petitions, and liaised with Falinski’s office for presentation of the motion.

Founder Natasha Dean said the group was “delighted and moved” that the motion has received bi-partisan support.

Both Falinski and Deputy Premier Barilaro have since publicly indicated that they did not support renewal.

Minister Pitt however, seems likely to support renewal of the licence, saying it was important that the advice of experts is considered in any decision relating to PEP 11.

“PEP11 covers an area 36 kilometres off the coast and activists and opponents from all over Australia often exaggerate claims in circumstances like these,” he said.

“I will be taking a reasoned and informed approach to any decision.

“The Coalition Government has made it clear that a gas-led recovery will play an important role in creating jobs and supporting manufacturing and industry to lift Australia out of the COVID recession.

“We will support new projects where appropriate approvals are provided.”

Member for Robertson, Lucy Wicks, said there was a “cacophony of misinformation” in the community and it was important Coast residents were aware of the facts.

“Like many, I know how crucial it is that our local environment is protected,” Wicks said.

“Our waterways and beaches are a major part of our lifestyle here on the Central Coast, supporting significant ecological communities as well as a diverse range of recreational uses.

“As such, it’s important that they and the marine life that live in it be preserved.

“If Asset Energy were to go ahead with any drilling activity they would need to apply to Australia’s independent offshore regulator, the National Offshore Petroleum Safety and Environmental Management Authority (NOPSEMA).

“The fact is that at this time, title holders of the PEP-11 permit area, Asset Energy, have not submitted any plans to NOPSEMA for any activity in the PEP-11 Permit area.

“Asset Energy have requested additional time to complete their work program commitments, and for a variation to the conditions of the permit to remove the seismic survey.

“This request will then be presented for a final decision by the Joint Authority.

“If Asset Energy submits plans for any activity to occur in the PEP-11 permit area, NOPSEMA would need to assess and approve their environmental plan.

Wicks said she would work hard to ensure that independent oil and gas regulators rigorously enforce Australia’s world-class regulations in relation to PEP 11.