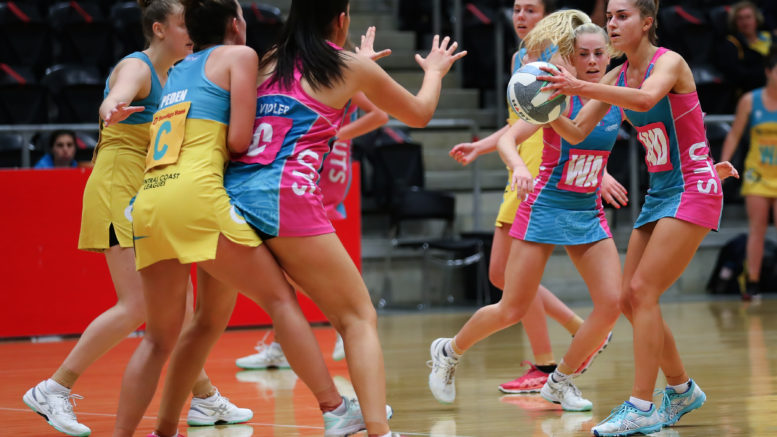 The Under 23’s in action against the Sparks Photo: May Bailey/Clusterpix Photography

It was heartbreak for Central Coast Heart in the semi-finals of the Origin Energy Netball Premier League, with both teams knocked out of contention.

Tipped as Opens grand finalists from the start, the Heart had been a dominant force throughout the competition and went into the playoffs as favourites, but it was not to be, with North Shore United getting the better of a depleted Heart outfit to take the match 53-42.

With two players out with injuries, Heart Club Captain, Alicia Walsh, said the Heart went into the match knowing it’d be an uphill battle.

“Losing two players to extensive injury was a hard blow heading into the semi, though the girls showed resilience and belief.

“A slow first quarter saw NSU pull ahead by eight goals off the back of strong zone defence and seamless attack.

“We turned over the ball well, but had difficulty getting it down court to shoot,” Walsh explained.

The second quarter saw a return of the form that made the Heart so formidable this season, with the Central Coast outfit pulling off an incredible turnaround to level the scoreline by halftime.

Heading into the third quarter with confidence, both sides went goal for goal until tragedy struck the Heart, when Defender, Aura Rodger, went down with an ankle injury.

With their momentum broken and a positional reshuffle required, NSU was able to capitalise on the Heart’s misfortune to break the deadlock and pull ahead in the fourth quarter, holding onto the lead to dash the Heart’s chances of a 2020 premiership.

It’s a disappointing end to a season of highs for the Opens, which included setting a new record premier league win streak, but players can take solace in their performance, with Walsh praising each and every member of the squad for their composure and competitive spirit despite the less than ideal circumstances they found themselves in on game day.

The Under 23’s playoffs were a seesawing battle between the Heart and UTS Randwick Sparks.

Neck and neck throughout the entire proceeding, ultimately the match boiled down to a last-ditch effort from the Sparks in the final stretch of the fourth quarter to end the match 51-47.

“Our Under 23’s had a strong first quarter and took a narrow lead, but the rest of the match saw the score remain even.

“This continued throughout the whole match, but it was UTS sparks who were able to pull away in the final minutes of the fourth to come away with the win,” Walsh said.

Like the Opens, Walsh said the Under 23’s should take pride in their efforts in the competition, particularly given the toll that the pandemic has had throughout.

“Both teams have done a great job being able to make a finals series in what has been an incredibly difficult year.

“They have represented the Central Coast with pride, and should be proud of themselves,” Walsh said.

Both teams now go into the playoffs for third place, with the Opens to face Manly Warringah Sapphires and the Under 23’s to meet North Shore United.

Heart tame Panthers to make it nine from nine