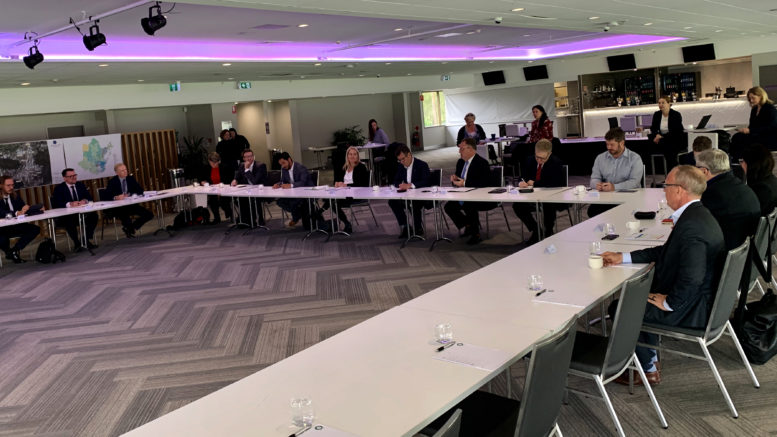 Industry, business and community leaders meet for the first time in a workshop to establish a Central Coast Strategy to bring new businesses and jobs to the region

The Central Coast is to be the subject of a new economic strategy in a major effort to bring new businesses and jobs to the region.

The Greater Sydney Commission (GSC) has been given the task by the NSW Premier, Gladys Berejiklian, to fire up the local economy with a first-of-its kind Central Coast Strategy.

GSC Chief Commissioner, Geoff Roberts, said it will help the region become the economic powerhouse that it has all the attributes for.

The Premier said the GSC, with its strong track record in delivering good local outcomes, would coordinate development and delivery of the Strategy.

“What we want to do is bring all the leaders on the Coast together, to consult, and to make sure that everybody is on the same page about what the Central Coast needs and what the future looks like,” she said.

Already two workshops have been held, on October 27, to set the direction for the Strategy.

One was with 24 government agencies and the other with 27 leading community, industry and business owners and groups, including Wyong Regional Chamber of Commerce, Business NSW, Industry Connect, Destination Sydney Surrounds North, Masterfoods and others.

The Premier said she wanted everyone to come on board with this Strategy and there would be consultation in the coming weeks and months to get the Strategy underway.

“I have asked the GSC to bring together key stakeholders on the Coast to identify new opportunities for economic and employment growth in the region,” the Premier said.

“The NSW Government is committed to providing more jobs on the Coast, a region which is expected to grow by 95,250 people between 2016 and 2041.

“The GSC will work closely with Parliamentary Secretary for Central Coast, Adam Crouch, and Minister for Jobs and Investment, Stuart Ayres, to bring together state and federal agencies, the local council and private sector partners, to identify wider economic and employment opportunities for the region,” the Premier said.

Crouch said the Strategy would identify and implement initiatives to cater for future population growth.

“The GSC has an incredible record of success when it comes to enabling local communities to grow and thrive,” he said.

“The Central Coast is a unique region and requires unique solutions, and that’s why a team from the GSC will be specially tasked with developing this Strategy.

Wyong MP, David Harris, who is also Shadow Minister for Regional Development, welcomed the news of the Central Coast moving under the control of the GSC.

“I called for greater planning co-ordination many years ago to get a job-creating development underway.

“We have massive potential to create jobs and economic prosperity through projects such as the Scentre Group at Westfield Tuggerah, the Pacific Highway upgrade through Wyong and the Link Road (Watanobbi to Warnervale) project which would open up employment land, Warnervale Town Centre project which is moving along but needs assistance, and the Wyong employment zone which has the potential to create thousands of jobs.

“I welcome any meaningful co-ordination between state, federal, local government and private investors to help create jobs and infrastructure in the Wyong electorate.

GSC Chief Commissioner, Geoff Roberts, said collaboration was the best way to deliver great outcomes and new opportunities for the community and businesses on the Coast.

“Nothing improves a person’s life more than a good job, particularly near where they live and we want to deliver more good local jobs,” Roberts said.

“This work will build upon the significant progress already achieved by the NSW Government and we look forward to collaborating with all stakeholders in what will be an inclusive and coordinated process.”