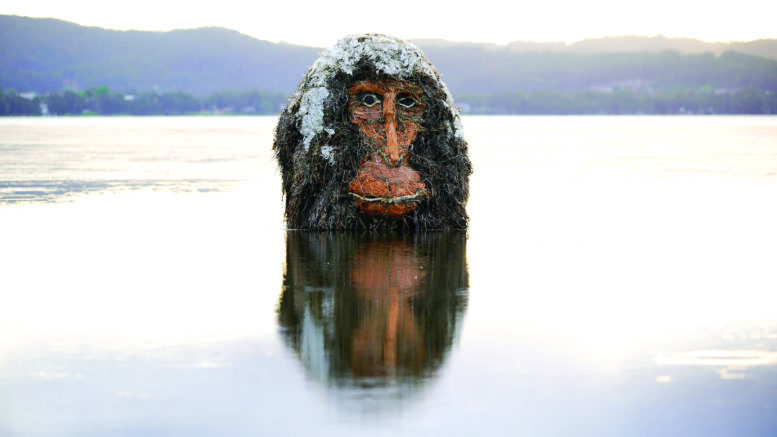 A Pete Rush driftwood and sea grass sculpture has appeared at Long Jetty.

Residents of Long Jetty awoke on Wednesday morning to find a giant Snow Monkey bathing in the lake not far from the suburb’s namesake.

From the mythical and prehistoric to the everyday, the Wamberal artist’s animal sculptures have captured the imagination of people around the Coast since they began popping up around beaches in May.

Made entirely from natural materials, the pieces have captivated the country, but until this week there’s never been one located within the former Wyong Shire.

But for Rush there’s no bias, with the artist simply following the materials which usually serve as the inspiration for his imaginative constructs.

“I go where the materials are, so when a friend who lives at Long Jetty told me about the sea grass there, I got curious,” Rush explained.

After spending some time observing the foreshore, Rush said the sea grass and its unique properties once dried, piqued his interest.

“I kept thinking to myself this stuff (bleached sea grass) looks like snow.

“The really dried out stuff also made this hard shell-like substance that was kind of like pavlova.

“It made me want to make something with snow and with the regular grass looking like hair, one thing led to another and I made Snow Monkey.”

Incorporating sticks, paperbark and both dried and freshly washed up sea grass, Snow Monkey cuts a mesmerizing figure on the horizon and is already attracting hundreds of curious locals to the foreshore, and for Rush the public response to his works continues to be a source of inspiration and wonder.

“When I started making the sculptures it was just on a whim.

“I’m actually a painter, but when COVID-19 hit, I figured that no one was going to be buying paintings, so I just took some time for myself and was on the beach one day when I saw some weed that looked like a horse’s tail.

“I ended up building this little horse out of driftwood and weed and other beachgoers just kept coming up to me to say how much they liked it.

“That really encouraged me to keep going,” Rush said.

And keep going he did, with his imaginative creations getting bigger, taller and longer, with Snow Monkey his 27th piece.

“I’m constantly amazed at the pleasure they (sculptures) bring to people.

“It’s really just a bunch of sticks, so it’s amazing to see.

“Someone said to me recently that seeing them is like ‘a little bit of magic on my morning walk’ and I really like that.

When asked if northerners could be seeing more of his work in their neck of the woods, Rush hinted that he’s not quite done with Long Jetty’s unique sea grass.

“When I was making Snow Monkey I kept thinking that the grass would be perfect for emu feathers, so I might make a couple of emus around the lake at some point.”