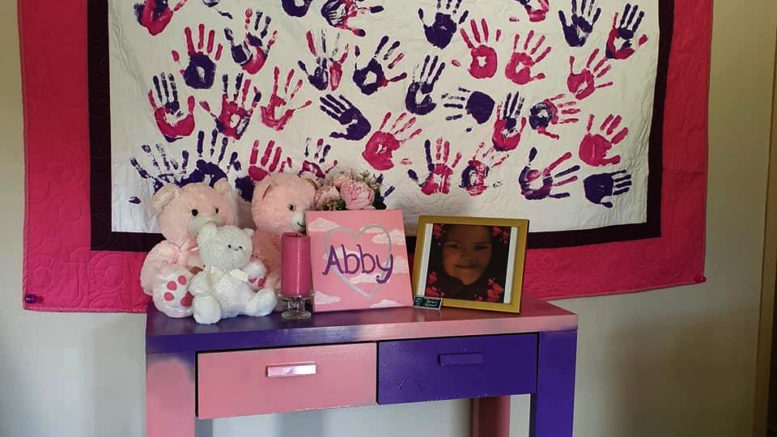 A memorial table set up for Abby by her mother, Rachel Reardon

A Kincumber family devastated by a fire which destroyed their home and claimed the life of their 13-year-old daughter Abby in February has issued a heartfelt thank you to community members who have rallied around them.

Rachel Reardon said an appeal organised by the Rotary Club of Kincumber had raised $15,000 for the family, which was then matched dollar for dollar by philanthropist Dick Smith through the Rotary Australia World Community Service (RAWCS) Compassionate Grant.

Reardon, her husband David and two of their children managed to escape the fire which engulfed their home on February 19.

Abby Hodge, unable to find her way out of the house, was rescued by firefighters but tragically died on the way to hospital.

“It’s been an extremely horrible year for us,” Reardon said.

“Our son William, 15 and our other daughter, Katrina, who is eight, were extremely traumatised; Katrina is still in counselling.

“People were so generous in donating and it meant so much to us, as we had no insurance.

“It is impossible to thank everyone individually, so we would just like to express our extreme thanks to all.

“We will be eternally grateful to the people of the Central Coast. The Community response was exceptional.”

Reardon said the family was living at Springfield but hopes to move back to Kincumber soon.

“Katrina still goes to Kincumber Public School and we want to be back in that area,” she said.

Sandy Hunt-Sharman of the Rotary Club of Kincumber was instrumental in setting up the fundraiser.

“This family was left with nothing; when they ran out of the house they were left with what they were wearing – and that was it,” she said.

“We were very pleased to be able to raise as much money as we did.

“We were able to settle some debts on the family’s behalf and fully furnish their new home.

“Kincumber High School, which Abby attended, has been extremely supportive.

“Principal Brent Walker and the school family has been marvellous.

“The students were asked to write down their fondest memories of Abby and these now feature on a memorial wall at the school.”