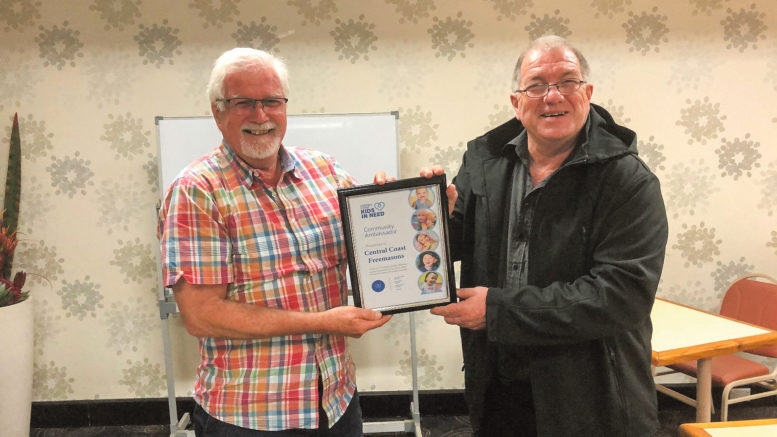 Freemasons on the Central Coast has received a Community Ambassador award from the charity, Central Coast Kids in Need (CCKIN), for its ongoing support.

CCKIN representative, Steve Sullivan, presented the award to President of Freemasons on the Central Coast, Geoff Bown, on September 24.

Bown said the award meant a lot to himself and the Freemasons’ other members.

“Central Coast Kids In Need has always been close in our thoughts as they truly represent charitable works,” Bown said.

Recently in partnership with the Central Coast Bulldogs and Wyong Leagues Club, the Freemasons group held a charity dinner for CCKIN and Saver our Kids from Suicide, raising $8,300.

A significant proportion of the money raised was due to donations from the local community and items auctioned off on the night or used as raffle prizes.

CCKIN provides moral and financial support to disadvantaged local families and children undergoing medical treatment away from their local area.

The charity does not receive Government support, relying solely on the generosity of donors, including Freemasons on the Central Coast.