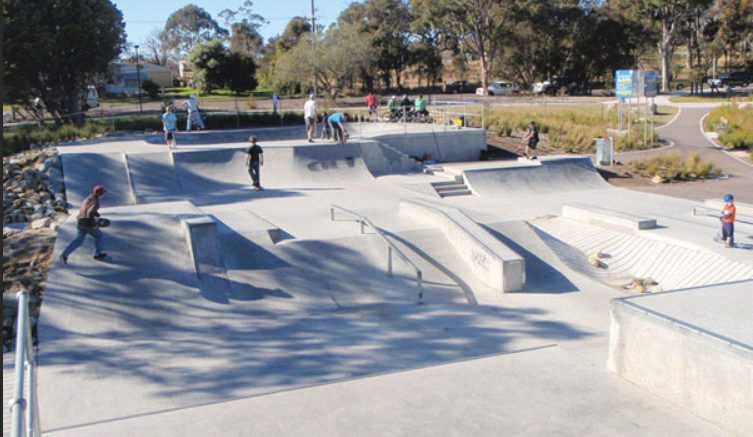 The popularity and success of Bato Yard at Bateau Bay, the only regional level skate park on the Central Coast, has highlighted the need for better and more accessible skating facilities.

Now, Council plans to build four high quality competition grade skate parks in all corners of the region, with Lake Munmorah being one of the short-term priorities.

A draft Skatepark Action Plan, consolidating former Wyong and Gosford Council documents into one, will soon go on public exhibition.

The Plan follows an independent assessment of Council’s existing 26 skate parks and provides future management, development, and activation recommendations for the next 10 years, in line with industry benchmarks and good practice.

It received unanimous support from councillors at their September 28 meeting, with the addition of a point confirming four competition grade parks for the region.

Mayor Lisa Matthews said the recent success and popularity of Bato Yard at Bateau Bay and Terrigal’s Banjo skate park, had highlighted the need for consistent short, medium and long term management actions across the region.

“Skating is an inclusive activity with many physical, social and mental health benefits for users, plus tourism and visitation benefits for the wider community when we host regional and national skate events,” she said.

“This draft action plan provides high level priorities to inform the development, accessibility, management and activation of our skate facilities to meet the growing needs of the community.

“Skating is an Olympic sport now and perhaps with this strategy and our commitment to deliver world class skating facilities, the next champion will be grown right here on the Coast,” she said.

The Action Plan’s ultimate aim is for an accessible network of high quality, multi purpose, inclusive skate parks that contribute to active lifestyles, support social engagement and creativity, and are appropriately sited and sustainably managed.

In 2019, Council engaged consultants to undertake an assessment of all 26 existing skate parks and results of the audit were used to prepare the Plan.

Key findings of the audit showed that more than 80 percent needed improvements, some larger skate parks provided little diversity in skater experience, not catering for different skill sets and ability level, 52 percent were local facilities, and Bato Yard was the only current regional level facility.

The Plan includes short, medium and long term recommendations, as well as a 10-year action plan for new skate parks and redevelopment of existing parks.

It also includes events, programs and funding opportunities through partnerships.

Short term implementation of the draft Action Plan is estimated to cost $425,000, with long term options estimated at $12.5M, and grant funding though State and Federal grant programs will be sought once the Action Plan is adopted.

With a 19.7 percent increase in population expected by 2036, and children aged five to 14 expected to be among the largest growth groups, the Skate Park Action Plan stresses the need for facilities to accommodate many styles of boarding, scootering and BMX riding.

It is anticipated that Wadalba, Woongarrah, northern lakes area, The Entrance, Hamlyn Terrace, Wyong and Gosford will be the largest growth suburbs into 2036.

With this in mind, a regional facility will be established at Lake Munmorah in the short term, one to three years.

A new district facility in Warnervale/Wadalba is planned for the long term, eight to 10 years, as well as a smaller skate park in the Tuggerah Chittaway Bay area.

In the mid-coast area, only three of the five were in excellent condition (Bateau Bay, Berkeley Vale, Terrigal), while skate parks at The Entrance and Ourimbah rated in the fair category.

Eight skate parks in southern areas didn’t rate any better with all in either fair or poor condition.

Scott asks for certainty on return to local democracy