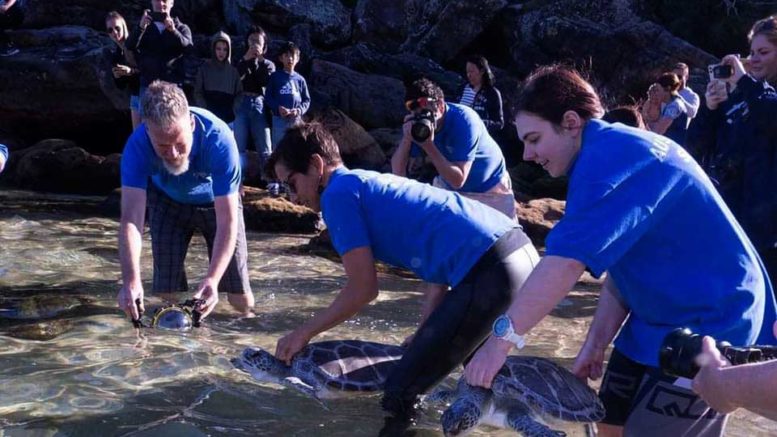 Members of Australian Seabird Rescue were jumping for joy recently as they re-released two green turtles into the sea after they had been cared for on the Central Coast for some months.

Central Coast co-ordinator, Cathy Gilmore, said because of the organisation’s name, many people didn’t realise it cared not just for birds, but also for marine reptiles, including turtles and sea snakes.

The two turtles, Ella and Billie, had been in care for six and four months respectively.

“Ella had been rescued after an alert from divers in the Cabbage Tree Bay area and was found to have swallowed a balloon with a 2.5 metre long string,” Gilmore said.

“It took her two days to excrete them and that was followed a few days later by the excretion of a plastic bag.

“But she was still very ill.

“She had septicemia and pneumonia and when our vet saw the x-rays he said if green turtles weren’t endangered he would have recommended she be euthenised.

“We decided to give her two weeks to show signs of recovery and thankfully she started to eat and make improvements in that time.

“We get a lot of tips from divers and residents from Sydney to Newcastle when they see an animal which looks unwell and we go and rescue them.

“When we retrieved Billie, he had a really bad bacterial infection which would have killed him.

“We had him in care for four months.

“Both animals had been off their medications for over a month, but we had to wait until the water was warm enough to release them.

“When you re-release an animal that has been cured it is a feeling like no other.

“We don’t always have a good outcome, so we love to celebrate a happy ending.”

“Donny was found in Terrigal Haven and was very ill after swallowing a plastic bag,” she said.

“Bluey was rescued from the Lake Munmorah area with a fishing hook in his gut and line tangled tightly around his flipper.

“It is still touch and go as to whether he will be able to keep his flipper.

“And then we have to try to get him free from infection with antibiotics.”

Gilmore said it was the organisation’s practice to name all the animals in its care.

“Ella was named by the volunteer who rescued her after a niece of hers who had supported her during breast cancer treatment, so that was a very personal naming.

“Billie was named by his rescuers as they weren’t sure of his sex and the name could suit either.

“Donny we named after a former well-known resident of The Entrance and Bluey was named by the kids who rescued him.”

Gilmore said Australian Seabird Rescue was the only organisation on the Coast licensed to rehabilitate marine reptiles and urged anyone who sees a sick seabird or marine reptile to contact them.

Terrigal water audit due for release