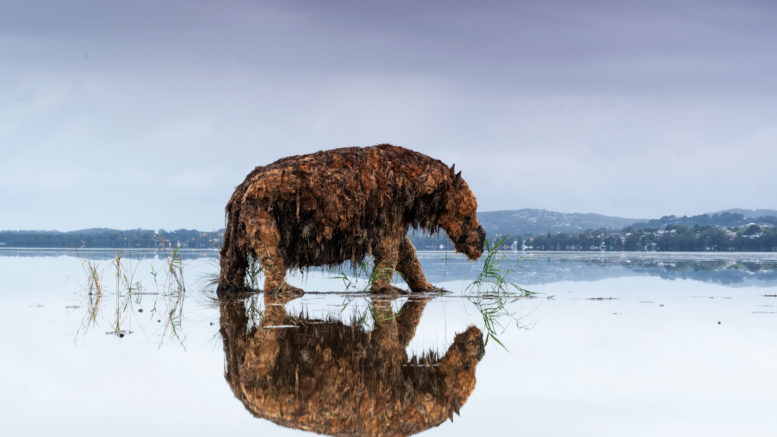 The Diprotodon grazing off the shores of Chittaway Bay Photo: Zee Merven

Not a week after his Snow Monkey dazzled the people of Long Jetty, Pete Rush has done it again.

Tucked away on a mudflat off Lions Park at Chittaway Bay, stands the Diprotodon.

The extinct megafauna is the largest marsupial to have ever existed and Rush has created it in all its glory.

Sporting a shaggy orange coat that contrasts starkly against the blue of the lake and the brown of the mud, the 2m tall construct is the Diprotodon’s likeness in every way, right down to its large maw, complete with teeth made from palm fronds, fitting for a creature who’s name literally translates from Greek to ‘two forward teeth’.

Once again, inspired by the materials around him, Rush said his 28th creation was almost a red kangaroo.

“When I came across this orange weed, I thought this was perfect for a red kangaroo, it was the exact colour, but then I thought that’s boring and started looking for something else when I found Diprotodon.

“It’s basically the predecessor for the modern wombat and is the same colour as the red kangaroo, but far more interesting,” Rush explained.

Setting also played a part in Rush’s foray into the old world, with the artist admitting that the mudflat gave him prehistoric vibes.

Despite having only finished his newest wonder beast on Tuesday, Rush said several dozen onlookers had joined him lakeside as he worked on the project.

“I had a steady stream of onlookers come down from the park to watch.

“It’s right near a school to, so a lot of kids have been down to ‘see the monster’.

“A few families have come down too, but I reckon that was more the parents wanting to see the monster than the kids,” Rush said.

With Diprotodon now complete, Rush encourages anyone who caught a glimpse before Tuesday to consider popping down again to get the full effect of the finished work.

His attention now turns to sculpture number 29 with the art now a weekly endeavour for Rush.

Rush played coy as to whether he’ll be making it three for three up north, but one thing that’s abundantly clear from talking to him is that the Wamberal artist’s love affair with Tuggerah Lakes has only just begun.