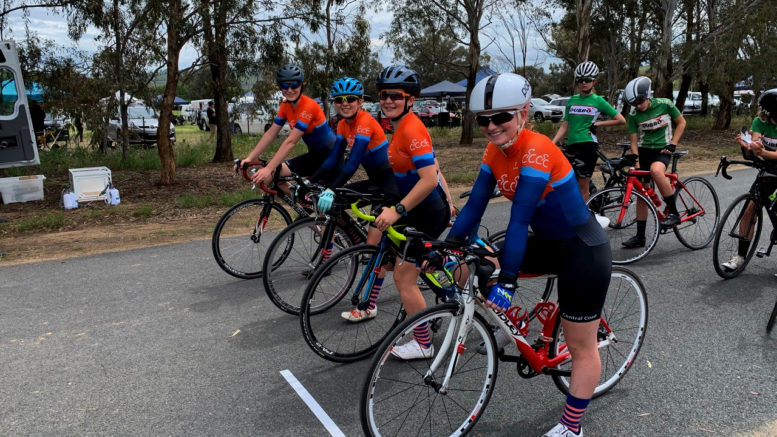 Suddenly the State championships became the most important race of the season.

But what a weekend of State Championship road racing our central coast junior riders had.

The CCCC had four juniors representing the club and the coast and all of them were in the same category; U15W – Daisy Guthrie, Emma Blume, Nicole Duncan and Liliya Tatarinoff.

In the Team Time Trial, which sees four riders working as a team, taking turns to shield the others from the wind, disaster struck early in the race when Emma’s bike suffered a flat tyre 3km into the race.

But with three riders only needed to complete the event the team was able to share the added load and finish a close second.

Nicole and Liliya could be heard approaching the final 500m, shouting encouragement to each other and, for those watching, this was one of the highlights of the championships.

Day 2 featured the U15W road race, a 30km race with a number of hilly pinch points where attacks were bound to happen – and did.

The first hill saw the first attack which thinned the group down.

Daisy and Emma almost dropped off the main bunch but managed to claw their way back to the group, just as a second attack began.

At the final climb, 5 kilometres from the finish, the lead group had reduced to just six riders, including Liliya and Nicole, and tensions mounted as they jostled for the final sprint finish.

On this occasion it was Liliya who powered over the field to take out the gold, with Nicole in third position.

Despite the Junior Road Nationals being cancelled Cycling NSW has chosen both riders as NSW representatives to acknowledge their achievements.