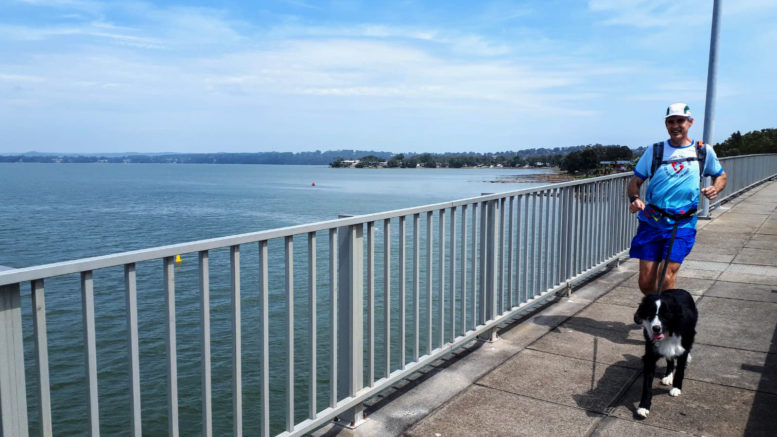 A 46km run around Tuggerah Lakes isn’t the way that most people would choose to spend a Saturday, but Jacques Raubenheimer has got a pretty good motivator, blood cancer.

On October 24, the Narara resident will complete one round trip of the lake in a charity run supporting the Leukaemia Foundation.

He’s hitting the pavement to honour his good mate, Louis Fourie, who was diagnosed with the insidious disease this time last year.

“Louie and I are actually both members of the Terrigal Trotters and had been talking about doing this run together when he was diagnosed.

“After seeing him remain so positive throughout his cancer battle, I was inspired to go ahead with it, but this time as a fundraiser,” Raubeheimer explained.

Just over standard marathon distance, Raubenheimer said that he was comfortable with the task ahead, and hopes to complete his loop of the lake in around five hours.

“I’ll be heading out from Picnic Point Reserve at 6am and hope to finish back there around 11am.

“My family will be positioned around the lake to make sure that I’m fed and watered, so it’ll be a case of slow and steady getting the job done.

“There’s not going to be any fanfare, but anyone who sees me is welcome to give me a wave.”

Despite his confidence, Raubenheimer said that he had been training hard, perhaps even a little too hard.

“I am actually nursing a sore knee from overdoing it, but I won’t pull out now.

“A sore knee’s a drop in the bucket compared to chemo.”

Further fuelling Raubenheimer’s drive is the startling figures around the disease, with 41 Australians diagnosed with blood cancer every single day.

It’s a statistic that Raubenheimer was shocked to learn and one that he’s kept in mind throughout his run preparations.

“It really was confronting learning how many people are and will go through the same fight that Louie is.

“The fact that he’s kept his faith and remained so hopeful throughout what he’s endured has been a continuous source of encouragement and motivation to me and just makes me want to finish the run even more.

The work of the Leukaemia Foundation has also inspired Raubenheimer, with the funds from his charity run to support their research and patient support services.

“My fundraiser will fund the special care that is needed to get families through a blood cancer diagnosis as well as to help fund more game changing research into this disease.

“The money I raise will help provide care for those in need right now and it will back the brightest researchers to continue uncovering faster diagnoses and better treatments to save lives,” Raubenheimer said.

Having already raised just over $4,000, Raubenheimer is now hoping that locals will help him reach his $5,000 goal in the days leading up to the event.

Going Dry in July to help locals living with cancer